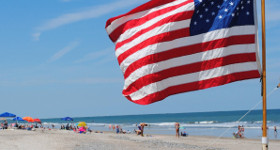 If you find yourself by Jacó Beach on this Fourth of July, you’ll be glad to know you can still celebrate the stars and stripes on your Costa Rican vacation. Let’s take a look at some of the ways to spend your Independence Day in a tropical paradise.

1) Fireworks by the Sea

Why not celebrate America’s founding with a picnic and fireworks at one of the most beautiful resorts on the Pacific? Starting at 4:30 in the afternoon on the Fourth, the Los Sueños Resort and Marina opens its doors to the public for a patriotic bash with live music and a menu that captures the essence of America. The big show begins at 7:30 with a fireworks display over the water. And it’s all just a 15-minute drive from Jacó Beach!

A full-service marina with shops and restaurants, Marina Pez Vela in Quepos is a good place to visit on any day of the year. But on the Fourth of July it’s also one of the area’s best spots to celebrate America’s independence. Perfect for an outing with the family, the celebration starts at three in the afternoon and goes until eight in the evening. The Kin Rivera Jr. Band featuring David Tucker provides live music with some classics you are sure to know in the mix. Enjoy grilled hotdogs in a picnic-style setting, home-style chili and a big slice of good old American apple pie. You can even have your picture taken with Uncle Sam. But the spectacular starts after the sun sets with a dazzling fireworks display over Pacific waters.

2) Spend the Day in the Sand

Most Americans who live within driving distance to the beach have spent a Fourth of July or two with their toes in the sand. Beach time and Independence Day go together like a hot dog and mustard. So why not get your gang together for a beach day this Fourth? With convenient shops and markets at hand, Jacó Beach makes it easy to load up the cooler with snacks and refreshments for a day of basking on the beach. Maybe make some time to take a surf lesson while you’re there. Another good surf spot, Playa Hermosa lies just south of Jacó and offers a more secluded and scenic beach day. For swimming and just splashing around, nearby Playa Herradura’s calm waters can’t be beat this Fourth of July.

Nearly no place on the planet likes to head off-road than in America, where the original ATV was invented back in the late 1960s. While today’s all-terrain vehicles are more powerful than the first models that were made in Ohio, they still capture that same American spirit of rugged exploration. So take an ATV tour and go tear up a mountain, winding through lush forest trails that lead you to majestic lookouts over the Pacific Ocean.

Sure, Costa Rican cuisine is amazing. But do you really want to celebrate the red, white and blue with gallo pinto? Americans have been flocking to Costa Rica’s Pacific shores for decades and their influence has left an indelible mark on Jacó’s foodie scene.

Stroll down Jacó’s main strip and get yourself an American-style morning meal with bacon and hash browns at Sunrise Breakfast. Under the helm of an owner who hails from historic Boston, the popular laid-back restaurant also has pizza, hot dogs and hamburgers in the evenings and is a regular stop for the late-night crowd.

But if we’re talking American-style burgers (because what’s more American on the Fourth than a big juicy burger?) you might want to check out Ridiculous Burgers. Order up their American Classic with red onions, or honor the 50th state with a pineapple-topped Hawaiian burger, both monster-sized burgers living up to the “ridiculous” claim. Smother US-made ketchup (not always easy to find in these parts!) on your fries and onion rings to truly taste the good old U.S. of A.

An ode to Americana that would be home along Route 66, Mary’s Diner embraces retro style with vintage roadside diner decor. At breakfast, lunch or dinner you’ll likely hear U.S. hits of yesteryear playing in the background to complete the homage to greasy spoons of American days gone by.

For gourmet-style bites that you’d find on a more cosmopolitan U.S. scene, the Green Room welcomes. Remember rainy days from childhood as you sink into a classic grilled cheese on homemade sourdough with a creamy side of tomato soup. Dream of the glistening waters of the Chesapeake Bay with crab cakes and sample a flavor of the Deep South with barbecued ribs. Or go completely Cajun with a classic Shrimp Po’Boy and a side of sweet-and-spicy coleslaw.

Speaking of Louisiana delicacies, the New Orleans-inspired menu at Graffiti Restro Café and Wine Bar has Cajun Pomme Frites and the unashamedly American dish of Corn Dog Lobster Skewers with Apple Remoulade. Perhaps you’d like to dig into some Shrimp and Grits with a barbecue glaze, or Candied Pork Belly in beer syrup.

And for an American fast-food fix, there’s always KFC and Subway right in town.

While you’re in Central America, fellow Americans and popular U.S. beers are prevalent across Jacó’s diverse nightlife scene. The Puddle Fish Brewery, with owners who migrated from Southern California, brings American brewing ingenuity to local craft beers, served with bar bites like Cajun fries and pretzel-encrusted chicken bites. A popular hangout for the expat community, Senor Harry’s has an open mic night this 4th of July. A favorite with gringos, the Orange Pub has karaoke on Independence Day. Maybe croon an homage to small-town America like Springsteen’s “Born to Run” or “Livin’ on a Prayer” by Bon Jovi. Enjoy some Las Vegas-style gambling at Croc’s Resort and Casino and a Miami-nightclub vibe at Le Loft.

So don your best red-white-and-blue ensemble, hum a few bars of Yankee Doodle and show your American spirit on your tropical vacation in and around Los Suenos, Costa Rica.