7 Exotic Animals You May Only Encounter in Costa Rica 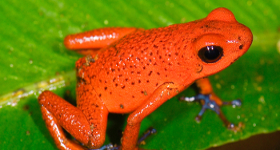 From rare animals in the area around Los Suenos, Costa Rica to the unique Costa Rican wildlife of rainforests and tropical isles, the lush Central American country offers a collection of uncommon creatures like no other.


Squirrel monkeys are found throughout South America but your best bet to see them north of that continent is in Costa Rica. Named for the fiery colors that run down their backs, the Red-Backed Squirrel Monkey sub-species makes its home in Tico territory. While a few have been spotted in parts of Western Panama, these adorable little critters with mask-like black-and-white faces otherwise reside only in Costa Rica. They were once prevalent across the land but now their population is estimated to be less than 2,000, living along the coast in the Central and Southern Pacific region. If you want to see these exotic creatures you can head to Manuel Antonio Park.

Meet a Multitude of Monkey Species


Setting aside the subspecies, four kinds of monkeys are native to Costa Rica -- squirrel monkeys, white-faced capuchins, howlers and spider monkeys. Squirrel monkeys like to hang out in the middle of rainforest canopies and prefer lush environments. Howler monkeys are the largest of the four and you will probably hear their booming calls before you spot them lounging high in the treetops. Famed for their intelligence, white-faced capuchins are curious creatures that may swipe your lunch when you’re not looking. Spider monkeys put on amazing acrobatic shows as they use long limbs to swing through the trees. If you want to see them all in one place, go to Corcovado National Park.


You must set sail for Cocos Island to get a gander at its namesake Cocos Finch. Set nearly 350 miles off of Costa Rica’s Pacific coast, the remote isle is the exclusive home to these rare birds that were studied by Charles Darwin. Some finches left their native Cocos Island and made it to the Galapagos Islands where there were the only one of 14 finches the famous naturalist studied that were not native to the Galapagos. While different environments spur evolutions like varied beak sizes in most birds, the Cocos Finch has remained remarkably unchanged due to Cocos Island’s small size and isolated locale.


One of the best places to spot a Great Tinamou is in Carara National Park. And this ground bird is truly great, having one of the oldest bird lineages in the world. The secret to its survival? Let’s just say Great Tinamous have “liberal” attitudes when it comes to reproduction. Procreation is something of a free-for-all with multiple females mating with multiple males. While the resulting bright green eggs are easy prey for predators, the sheer volume of fooling around guarantees survival of their offspring.


Native to the Americas and found all across the two continents, hummingbirds come in over 300 varieties. Over 40 of these live in Costa Rica and one of the most magnificent is exclusive to the areas along the Pacific shores. As you might have guessed, these splendid bronze and green birds make their homes among mangroves, feeding on nectar from the flowers of tropical and subtropical mangrove forests set just back from ocean waters. So hop a boat and take a mangrove tour to see this rare and threatened species.


If you stroll through a rainforest in Costa Rica there’s more than a good chance you will happen upon some Strawberry Poison-Dart Frogs. You might actually see one at the airport as Costa Ricans put the beloved amphibian on stamps, advertisement, art and almost anything else they can spruce up with the iconic critter. Though small in size, the frogs are easily spotted and recognized by their large dark eyes and bright red skin, though they can vary greatly in color. Keep your eyes peeled downward as you walk along rainforest trails as these little guys often live close to the forest floor, though they do climb trees and branches for loftier views.


While snorkeling and scuba diving in Costa Rican waters offer the chance to see amazing undersea life, from sea turtles and rays to angelfish and puffers, the little blenny is always a welcome find. Tucked into vacant wormholes of coral reefs, these tiny fish have faces full of personality, with big eyes and visible teeth that seem to have a hint of a smile. But be careful. These little two-inch-long fish are not above sinking their sharp teeth into the fingers of divers!


While a huge variety of big game fishing brings anglers from across the globe to the waters of Costa Rica, there’s arguably no greater prize than marlin. They typically weigh in at 200 to 400 pounds (though can come close to 1,000 pounds or more!) and put up fights that can last up to six hours when hooked. Migratory Blue Marlin feed on surface fish, while Black Marlin are the largest and fastest of the group. Striped Marlin are smaller by comparison, but more than make up for their size with a feisty fight on the line. All three can be found in Costa Rica’s Central Pacific waters.

With Costa Rica’s Pacific shores giving way to lush expanses of inland forest and coastal mountains, diverse outdoors experiences are always close at hand. Spend a morning getting back to nature along pristine rainforest trails and an afternoon basking on popular Jaco Beach to enjoy a truly exotic escape in Costa Rica.