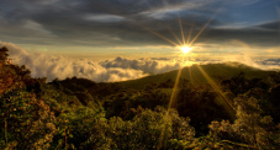 If you’re planning a trip to the Jaco Beach and Los Suenos, Costa Rica areas, you might be happy to hear that U.S. News and World Report ranks Costa Rica as one of its Best Countries. Why? Well, they break it down according to several factors and Costa Rica gets high marks for its rich heritage, cultural influence and quality of life. The latter is best personified in the national credo of “pura vida,” translating to “pure life” but used in almost innumerable ways to express the nation’s decidedly chill outlook on life.

But "adventure" is the country’s highest-ranking factor according to U.S. News, which puts Costa Rica in the Top 10 worldwide. What will adventure-seekers find in Costa Rica? That may be easier answered with the shorter list of what adventures won’t encounter. With mountains and sea, dense jungles and rushing rivers, Costa Rica can help check nearly every box on the adventurer’s to-do list. Let’s look at some of the most-popular adventure experiences.

A Range of Zip-Line Rides

When one thinks of Costa Rica the vision of flying across a green jungle canopy on a zip line inevitably comes to mind. Head to one of Costa Rica’s most popular seaside towns to find one of its best zip line rides. In the mountains that back the scenic beach scene of Jaco, you can strap yourself in for wild rides with stunning views along the coast. Keep an eye out for capuchin monkeys swinging through the trees and it will be hard to miss the breathtaking sight of a waterfall as you skim across the verdant treetops.

But some of the adventure of a zip line tour is actually found on the ascent. Not far from Jaco lies an open-air tram that takes you on a serene ride up into the coastal mountains, along the way likely passing a rainbow variety of tropical birds. The popular Arenal Volcano also offers a tranquil trip to zip-line rides, this time in a gondola. Arenal’s Sky Tram takes you on a 30-minute glide through stunning scenery with dramatic views across the volcano and shimmering waters of Lake Arenal. Grab some pictures on the observation deck before your plunge back down. Given that Costa Rica is covered in mountainous green terrain, the list of spots to soar above the grandeur just goes on and on.

An Abundance of Ocean Adventures

Costa Rica is home to world-class waves that draw surfers from across the planet. For beginner to intermediate surfers, Playa Jaco is a great place to take surf lessons. Not far down the coast from Jaco Beach, Hermosa Beach is better suited for more-skilled wave-riders and has hosted major competitions including the Billabong World Surf Tournament.

For the truly adventurous seafarers, there’s no better way to explore the ocean than in a kayak. The lightweight crafts are perfect for exploring the waters along the Pacific coast such as Playa Aqujas, backed by a rolling green landscape where you’re apt to spot monkeys and sloths in the trees and a host of colorful tropical birds overhead. A kayak is also an amazing way to explore the mangrove-lined waterways that empty into the sea.

Kayak trips through spots such as the Damas Island estuary reward with easy glides along canals that are shaded by a dense jungle canopy home to abundant wildlife such as white-faced monkeys and native anteaters.

If you’ve ever even thought of setting out to hook a marlin, chances are you’ve heard of the Central Pacific and fishing charters out of Los Suenos Marina. Anglers from across the planet descend on these waters with the hope (and high probability) of doing battle with a mighty marlin. Those looking for table fish can’t beat the massive yellowfin tuna that populate the waters off of Costa Rica’s Pacific coast, along with dorado, wahoo, roosterfish and snapper. It’s no wonder the Central Pacific is a hotbed of both world-class tournaments and amateur angling.

A Variety of Rainforest Excursions

There’s almost no other outdoor adventure that brings smiles of wonder to faces and makes your trip to Costa Rica all the more worthwhile than getting up close to unique wildlife. And there’s almost no better place to see exotic animals than Manuel Antonio National Park.

Its relatively small size, when compared to the country’s other parks, make it easier to traverse a range of landscapes, from white-sand beaches to trails through thick rainforest. Along the way, you will pass the habitats of an amazing range of animals. Keep eyes peeled for white-faced capuchin, squirrel, spider and howler monkeys. Giant iguanas amble along the ground while furry and friendly-faced sloths laze in the trees. Scarlet macaws are arguably the most-notable and brilliantly colored of the over 180 bird species that call the park home.

When you dream of delving deep into a lush rainforest you might not necessarily think of a river ride in Costa Rica. But you should. Costa Rica has renowned whitewater runs that course through unspoiled tropical terrain.

For beginner to intermediate rafters, the Savegre River has Class II and III rapids that wind through some of the country’s most beautiful scenery and unique wildlife habitats. For the more experienced, the Naranjo River has Class IV rapids that twist and drop through a dramatic gorge and dense jungle landscapes.

Some may think that rainforest treks and high-octane fun are separate experiences.

They probably haven’t been to Costa Rica! Amble just back from a tropical beach and hop on an ATV for a wild ride up into coastal mountains. Your tear through pristine countryside traverses a host of landscapes, deep into dense primary rainforest with a stop-off to swim under a towering waterfall. Cruise through remote villages and past wide expanses of farmlands on your ATV adventure.

Of course, there’s more adventure than we can list here. Cruise in a catamaran to a tropical isle, snorkel in crystal clear turquoise waters and scuba dive to a sunken wreck. Basing yourself by Playa Jaco is one of the best ways to experience it all and enjoy the adventure trip of a lifetime.