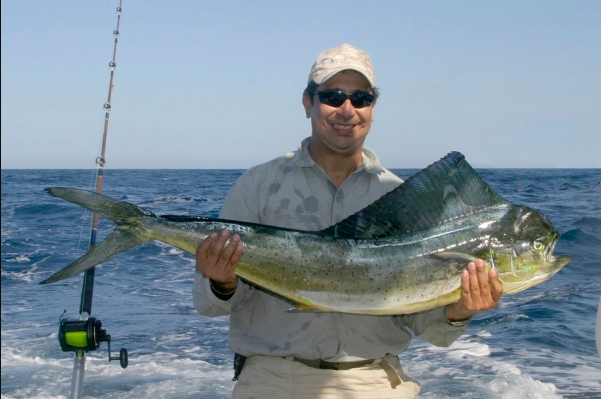 Green Season is upon us, and as expected, the annual migration of large yellowfin tuna and impressive dorados is upon us as well. Our pacific waters are ready for fishing charters out of Los Suenos Marina. Over the next few months, exceptional numbers of snappers and roosterfish will join in, providing plenty of inshore excitement to eager fishing enthusiasts from around the world.

We call it “Green Season”

The term “Rainy Season” is somewhat misleading. It conjures up a constant rain that relentlessly drizzles down on the entire country from the start of May until end of November. The reality, however, is quite different. While the majority of the yearly rain accumulation in Costa Rica will take place during this six month period, it is far from a half-a-year of endless downpours. In the first few months of the rainy season, it is common to see no rain at all. In fact, throughout every month of rainy season, sunny days are not uncommon. On the days when it does rain, our section of the Pacific Coast typically experiences sunny mornings that give way to short but powerful showers in the later part of the afternoon. These showers rarely last longer than an hour or two, and since they occur later in the day, they rarely affect fishing charters. On land, the rainforests become more vibrant than ever. Vivid greens, colorful blooms and magnificent tropical flowers springing to life. This is why we prefer to call it this time of year our “Green Season”.

Green season is the best season for catching dorado, (mahi-mahi), in the Central Pacific waters off Costa Rica. Acrobatic leaps and blasts of high speed make this delicious species of colorful fish a favorite among serious anglers. Offering both a terrific fight and a tasty reward, Dorado’s flake white meat is perfect for grilling.Although Costa Rican waters prove fertile for dorado throughout the calendar year, peak season is typically from May until December. It is during this time we often see the biggest dorado of the year, with many weighing in at around 40 to 50 pounds or larger. During the Green Season, captains hunt for dorado around floatsum that is swept out to sea by the seasonal rains.

Another fish that enjoys Coast Rica’s Pacific waters year-round are yellowfin tuna. During the Green Season, density increases and we see our best numbers from May until October. We also see our largest yellowfins of the year during this time, with common weights from around 100-300 pounds. During the rest of the year, it is more common to see smaller tuna in the 30 to 60-pound range. This huge increase in big fish is what brings tuna-loving anglers from around the world to Costa Rica during our Green Season months.

Naturally strong, bigger yellowfin tuna are known to put up an fierce fight that has made them a favorite of serious anglers. Live bait is often the best method to hook these larger yellowfins. Chasing tuna can be exhilarating as they school together around pods of spinner dolphins. Their huge numbers often span into the thousands. Tuna has a delicious taste that offers versatile options for preparation. From sushi or ceviche boat-side, to pan-seared, to grilled - yellowfin is a delicious reward for a day of fast chases and energetic fights.

Costa Rica has no shortage of snappers, from Mullet to Yellow, to Spotted Rosy and beyond; but what we really want are Red Snappers. We want Cuberas. While perhaps not as thrilling as targeting offshore marlin, snapper fishing has plenty of rewards. Trolling the rocky reefs and the inshore shallows requires focus, and you will have a tough fight on your hands when an 80-pound Red Snapper or a 100-pound Cubera makes a run for the bottom in a display spectacular strength.

A delicious table fish, the sweet and nutty flavors of Snapper are complimented by its moist, firm texture. For those who prefer a fish that doesn’t taste particularly “fishy”, Snapper holds seasonings well and is excellent pan-seared or grilled.

While you can eat Roosterfish, the toughness and flavor don’t make for an obvious dining choice. Of course, catching a Rooster is less about eating them and more about fighting them anyway. Robust, fierce and capable of outstanding displays of strength, this delight of many a fisherman has earned Roosterfish a place on more than a few angler’s bucket lists. Have your camera ready when you reel one in, as their distinctive spines make them an incredibly unique and beautiful fish.

Contact one of our agents to book your perfect fishing trip. There’s no better time for Dorado and Yellowfin, and there’s no better place than Los Suenos and Jaco Beach to turn your sportfishing dreams into a reality.