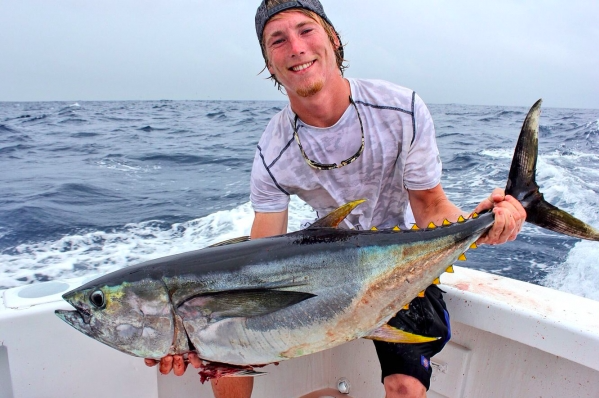 With the Green Season in full swing, Costa Rica is seeing a bloom both onshore and off it. While billfish season may be on its way out, June brings a peak in numbers for many fish. Some of the most surprising catches of the season are on the upswing for fishing charters out of Los Sueños.

Yellowfin tuna numbers continue to surge for offshore anglers. Most catches weigh in at 100 pounds, but some even make it up to 300 pounds. Yellowfin tuna are terrific fighters that put on quite a show when hooked. While yellowfins are in our waters all year round, June marks the best time to fish for big catches. Large schools, often accompanied by feeding spinner dolphins, are plentiful and are a satisfying challenge for even the most experienced anglers. They make a beautiful catch and offer the chance to enjoy fresh-caught sashimi or sushi.

Mahi-Mahi, also known as dorado or dolphinfish, are also biting steadily, with catches ranging from 20 to 40 pounds. These colorful, energetic fish give a great fight. Their speed on the line often sends them flying above the water, putting on a dazzling display of their bright scales. Dolphinfish are particularly fun to find during the Green Season, as they hide among the flotsam washed into the ocean by the rains. Peak mahi-mahi season may come in the later months, but that doesn’t mean the waters are empty. Our anglers are regularly pulling in moderately sized dorados. Like yellowfin, mahi-mahi offers a delicious meal for the end of the day.

Wahoo aren’t the most plentiful fish for Central Pacific anglers, but as June brings them into the waters of Los Sueños, the chance of hooking one of these silver speedsters is on the rise. WE’re already seeing bites from these predatory fish. Wahoo are widely regarded as one of the fastest fish: their first, viciously fast run can burn out the drag on some reels. The difficulty involved in catching one makes Wahoo an exciting accomplishment for any angler. Wahoo are toothy fish, so you’ll want a wire leader to keep your catch from biting through the line. Wahoo can reach up to 100 pounds, but during June we typically bring in 20-35 pounders. These fish are elusive and can reach speeds of almost 70 miles per hour. There’s a reason many anglers have Wahoo on their bucket lists!

Peak Marlin bites may have moved north for the season, but black, blue, and striped marlin are still in the area. They can be a challenge to find, but as soon as you have one of these giants on the line, you’ll know the wait was worth it. Anglers in the area tend to bring in Marlin ranging from 100 to 400 pounds. To preserve the species and keep sport-fishing alive, anglers aren’t allowed to boat marlin, but the excitement of testing your mettle against one of these giants is what makes marlin fishing such a memorable experience.

Inshore fishing is no less diverse. The nightly rains bring logs and other forest debris down to the ocean, creating the perfect environment for a wide variety of potential catches. We’re seeing tripletail, runners, amberjack, and bonito tuna fill the waters inshore, along with roosterfish, mackerel, and snapper. You may even find some wahoo and yellowfins inshore, preying on the smaller fish.

Mackerel aren’t particularly strong fish, but their beauty makes up for the lack of fight. Gold, blue, bronze, and green scales make this iridescent fish a breathtaking catch. Mackerel is delicious, as well, making excellent sashimi or sushi.

Roosterfish are some of the more exciting inshore catches. They provide a heart-pounding fight for both novice and experienced anglers, with tremendous strength for their size. Once you pull them in, their beautiful coloring and spiny dorsal fin make for a great photo. While we’ve mostly been pulling in 20 to 50 pounders, the older roosterfish around Los Sueños can range up to 100 pounds.

Snappers offer a challenge to inshore anglers, as well. They are often found near rocks and inlets. Hooking a snapper may not be as cinematic as hooking a marlin or tuna, but snappers are strong for their size and make a fun fight for all anglers. As an added bonus, snappers make a delicious meal, with subtly sweet meat that grills well.

If inshore or offshore fishing is on your list of things to do in Costa Rica, Jaco is the place for it. It’s a hotspot for some of the world’s best saltwater fishing. Contact us online or at 1-800-761-7250 to schedule the fishing trip of a lifetime.