5 Must-Try Foods at the Limón Carnival in Costa Rica 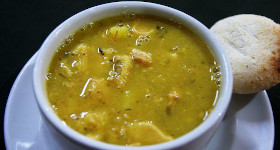 While many of Costa Rica’s adventure tours center on the Pacific side in and around the Los Suenos area, the country’s less-visited Atlantic coast is well worth checking out. And there may be no better time to go than during October’s Limón Carnival. Honoring the region’s rich Afro-Caribbean heritage, the event finds calypso music filling the air as costumed parades take over the streets of the tropical city by the sea.What kind of food will you find? Spicy, sweet and totally unique, dishes served by restaurants and street vendors are not to be missed. Here are five you should definitely try.

Costa Rica’s traditional favorite of gallo pinto, with a base of rice and beans, gets a flavorful island-style spin in Limón. Beans are mixed with coconut rice, fried plantains and Caribbean spices for a delectable dish that’s sold at stands all along the parade route.

If you’re not a big fan of tripe, you’ve probably never had it in mondongo soup. The cow (or pig) stomach is diced and boiled for hours with vegetables including bell peppers, cabbage, carrots, onions, and tomatoes. Seasoned with cilantro, garlic, basil, bay leaf and parsley, “sopa de mondongo” is served in a bowl with a side of rice. One try and you’ll never speak ill of tripe again!

This hearty stew, popular across Central America, gets a particularly Caribbean take on Costa Rica’s eastern side. Fresh-caught fish from Atlantic waters mix with coconut, vegetables such as yams, carrots and potatoes, and local fruit. And don't forget the chile panameño. Also known as Scotch bonnet or bonney pepper, the red chili is a staple in recipes that originated in West Africa and emigrated to the Americas. There’s almost no seafood mashup that goes better with balmy tropical evenings than rondón.

Also spelled as pattie, patty or paty, these traditional turnovers originated in Costa Rica and are found everywhere throughout the carnival. Their convenience makes them accessible, as you can easily pop one (and another, and another) of these bite-sized pastry treats into your mouth. The baked empanadas are stuffed with spiced ground meat, seafood or chicken, along with rice, vegetables, habanero chiles and seasoned with turmeric. You don’t even have to wait until you get to the carnival as you’ll surely see stands selling patís on the road leading into Limón.

The Jamaican classic made its way to the Costa Rican shores long ago and almost no place does the dish better than Limón. While not so hot you’ll go gasping for water, it’s still got a kick with Scotch bonnet peppers and Allspice. But the creation has its sweet side, marinated with orange and lime juice and seasoned with ginger and garlic. Load up with sides like jasmine rice, tangy coleslaw with cayenne and lemon-paprika potatoes and you’ve got a culinary mesh of cultures found in Limón.

And for some final honorable mentions, top off your meal with a dessert of “pan bon,” cake with candied fruit, nutmeg, brown sugar, and vanilla, or the coconut candy “cajeta” made with sweet caramelized goat’s milk.

While the Pacific side of Costa Rica has popular hot spots like Jaco Beach and some of the best outdoor adventures in the country, the Caribbean coast offers culture, cuisine, and carnivals like no other.