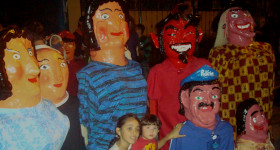 If you are taking a trip to Costa Rica in the Los Suenos area in late October, don’t worry about missing Halloween back at home. You can celebrate Día de la Mascarada on your tropical getaway.


Sure, America is all over Halloween. The tradition started with the ancient Celts and was adopted across Europe, but it wasn’t until the 19th century when Americans began dressing up for trick-or-treating that the holiday took its current form. Since then, Costa Rica has taken the tradition of dressing up on October 31st into an entirely new direction with a decidedly Tico twist. We give you Día de la Mascarada.

Translating to Day of the Masquerade, the celebration also has roots in the Spanish Carnivale, when street dancing and costumed balls take over Spain in the week before Lent. In 1996, Costa Rica’s Ministry of Culture made the celebration official with the establishment of a yearly parade dubbed the Dia de la Mascarada Tradicional Costarricense.

Today, the biggest parties can be found in the towns of Aserri, Barva, Cartago, and Escazú on the outskirts of San José. Escazú is of particular importance to the event, as they’re the artists’ hub for mask-making and throw some of the largest street celebrations.

What Will You See?

You’ll see a lot of heads, big heads, comically oversized heads, bobbing, weaving and dancing through the streets in processions across the land. These papier-mâché heads represent months of work for local artisans, who craft the faces using clay molds, newspaper strips, and glue. After exaggerated expressions are added to the creations, it can take up to a month for them to dry before the big day, when they’re mounted onto frames and dropped onto the shoulders of a parade participant who is expected to dance throughout the day.

Prepare to Get Chased

Yes, if you choose to check out an event, it’s more than likely that you will become part of the show. Spectators are not simply onlookers at the festival but active participants, that is after a masked figure starts bobbing at, weaving at and chasing unsuspecting people along parade routes. But fear not, there’s never been a report of a papier-mâché casualty.

What Do the Figures Represent?

While some of the characters go back to Spanish folktales, most of the figures represent tales from Costa Rica’s storied past. They include a headless priest of Cartago who legend says roams the earth in misery for killing his brother to have his brother’s wife. You’ll surely see one or two representations of La Segua, a beautiful woman who is transforming into a dead horse as punishment for the unfaithfulness of her husband. Local lore says the Witch of Escazú lives hidden in its surrounding hills, but you will see the hook-nosed mascot of the city proudly out in the streets on the big day. Other traditional characters include the toothy Diablo, and the oversized couple the Giant and the Giantess.

What Will You Hear?

Music fills the streets throughout the festival. But rather than the melodies you are apt to hear in Costa Rica most of the year, the bands have a very specific purpose and presentation during the festival. The musicians during the festival time are known as “Cimarronas.” The Spanish word for wild is “cimarrón” and these performers live up to their name. Perfect for dancing in the streets (and there’s a lot of that) the music is loud, brash and meant to spark frenzy. Lines of drums pound through the streets and Cimarronas bang on portable marimbas for the infectious melodies that fill the air.

So maybe some October you can head to Costa Rica, take an ATV ride, bask on Jaco Beach, and get chased by a giant head during one of the country's most unique holidays.