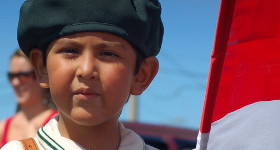 Have you thought of September for your Costa Rica vacation in and around Playa Jaco? Here are some handy things to know if you’re here during the Independence Day celebrations.

1) It’s Got a Torch Tradition!

The event begins before the 15th for the torchbearers who set off in Guatemala. Their relay with other runners crosses Central America and delivers the torch to Cartago, Costa Rica’s onetime capital, on the 14th of September.

The colorful lanterns in the streets symbolize the lanterns used to carry the first news of independence to Costa Rica. Crafted in schools, homes, and shops, these creations are paraded through towns across the country.

3) Troops Are Not on Parade

Unlike many of its neighbors, Costa Rica doesn’t honor its military with marches. It hasn’t got an army! Costa Rica’s military was abolished in the 1940s.

Costa Rica has a unique clothing heritage and likes to show off its traditional dress. For men, that’s usually all-white cotton pants in a button-up shirt combo with a red sash and red neckerchief. Women flash color with layered skirts, go ruffled with blouses and tuck flowers into braided hair.

A celebration of national pride often comes with the proud imbibing of Costa Rican brands. For beer, you’ll often see locals drinking Imperial, a pale lager with the iconic eagle label. If we’re talking cocktails, lots of concoctions start with the local sugar alcohol Guaro, the nation’s unofficial national spirit. One of the most time-honored Guaro cocktails is a Guaro Sour, mixed with club soda, sprinkled with raw sugar and finished with a squeeze of lime.

6) The Symbolism of the Seal

If you’re anywhere near celebrations, chances are you’ll see the national seal and may wonder about the landscape that rivals Jurassic Park. Well, the three volcanoes represent Costa Rica’s three mountain ranges in between the Atlantic and Pacific coasts. Seven stars above signify the country’s provinces, while the golden embossments resemble coffee beans to honor Costa Rica’s prosperous coffee heritage.

If you’re in Costa Rica in the months or weeks leading up to Independence Day you’ll notice that schools and parks are always abuzz with bands. The students have been practicing for a huge component of the festivities. Playing traditional tunes with some pop and surprises in the mix, a marching band is likely to tromp across your path.

That blue, white and red (yes, in that order) flag has blue to symbolize the sky and opportunity, white for wisdom and peace, red for the warmth of the people and the blood shed in their defense.

9) It Was Freedom Without a Fight

For most, anyway. While bloody colonial wars were common across the Americas, Costa Rica remained mostly peaceful during the clashes. The Mexican War of Independence changed things across the continent and Spain, depleted from years of multiple wars, supported Central America’s push for independence.

10) The First Celebration Was a Little Late

Okay, a lot late. While the Central American Congress officially declared independence on September 15th, 1821, the news from Guatemala took weeks to reach Costa Rica via land and sea.

So if you’re in the Los Suenos area and see some of the September celebrations, hope you now have a few insights into how Ticos carry on their traditions.