Blue and Striped Marlin on the Rise 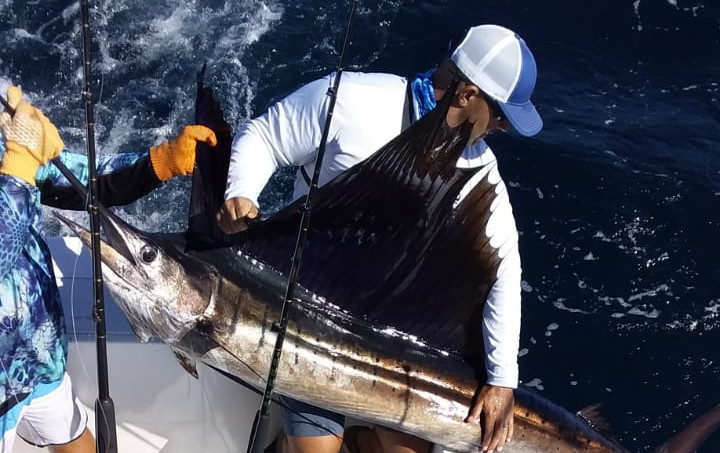 If you’re thinking of booking a fishing charter out of Los Suenos Marina, you might want to know what’s been biting lately. Here's a snapshot of what anglers have been hooking.

Yellowfin tuna is always in the report, because, well, they’re always biting. If you head offshore and look for pods of spinner dolphins you are almost guaranteed to come across yellowfins. And so, inevitably the question comes up (a lot). What’s the best time to catch tuna? Answer: Every day.

Of course, it varies, we do start to see the density and their size rise each year around mid-April and May and then the peak lasts until August. This past month was no exception and we hauled in lots of smaller tuna in the 15 to 20-pound range, and almost as many mid-sized in the range of up to 50 pounds. But if you are in the right spot and baiting with live bonito, chances are you can hook a whopping 200 pounder. We brought in quite a few of these massive yellowfins over the past few weeks. So while we’re on the downslope of the peak density time, the upcoming months should be fairly steady for yellowfins of all sizes.

Dorado on the Rise

Dorado is a fish that doesn’t always get as much attention as yellowfins when anglers are asking about their charters. But maybe they should. Like tuna, dorado are abundant throughout the year but also fluctuate according to season. We’re just at the start of prime dorado time, which generally kicks off in September and October and runs until December when we see their numbers drop off a bit.

Dorado are mostly in the 20 to 40-pound range but it seems about once a week a fortunate fisherman brings in a 50-pounder. No matter the size, dorado are spirited foes and most anglers really enjoy the fight on light tackle. Also like tuna, they’re an amazing table fish. It’s one of the more popular fishes for grilling on the barbecue since its firm texture holds up well and doesn’t come apart as easily as other catches under fire. With a sweet mild flavor, dorado is also a good choice if you are making spicy dishes and the fish also works well baked, sautéed and in soups.

Black marlin have been a highlight close to shore. While blue and striped marlin make amazing catches, black marlin is especially coveted for their rarity, size, and power. While you can find them while trolling offshore, inshore spots have been better over the past month. We’ve been live baiting with small tunas and skipjacks along the inshore reefs and hooking some magnificent blacks in the 500-pound range that put up fights that have lasted for about five hours. Often peak black marlin time runs from October through December. They tend to taper off in January and lull until March then pick up again in April for a steady run through to fall.

Sure, they lack the drama of black marlin, but snapper and roosterfish have been plentiful in the waters close to shore as well. We’re also seeing nice inshore numbers of grouper, mackerel, and jacks. We’ve been having some pretty good luck deep dropping overall, but the roosters seem to please most anglers the most.

For their size, (which we’re seeing at around 50 pounds though some bigger ones have been hooked recently) roosters put up a struggle that can almost match the intensity of a marlin. Well, at least anglers seem to enjoy the catch almost as much. Snapper and rooster tend to see a drop off in density somewhat in September and October, so we expect to see them fall off a bit, but they’re both pretty reliable year-round catches.

If the past years are any indication (and they almost always are) we’re just at the start of a good run for both striped and blue marlin, as they tend to increase in density in mid-September and remain solid through to January. Granted, June and July are also a good time for blues, so it really is a year-round catch. We can say the same for striped marlin, often smaller than the other two but plentiful year-round.

Charters fill up fast so contact one of our agents soon to reserve your spot for the fishing trip of a lifetime out of Los Suenos by popular Jaco Beach.