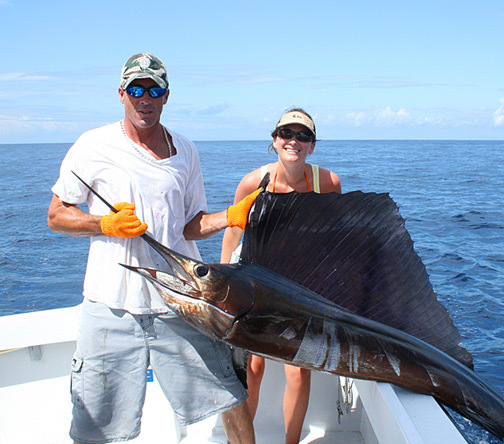 The offshore Los Suenos fishing over the past month has been absolutely going off. It is sailfish season on the Central Pacific Coast of Coast Rica, and so far it has been a record year.

Most days we have been catching at least 10-15 sailfish, and many days we are catching more. On January 30 we caught 25 sailfish out of about 40 aboard our 34’ walk-around. That is red hot Costa Rica fishing with non-stop action.

Last month was the Los Suenos Billfish series where a new record was set of 1412 (sailfish and marlin) being released by 38 fishing boats over the three day fishing tournament that runs between January 10-12th.

On some days we catch ten sailfish before noon, and the Los Suenos fishing charters want something else. Some days we wind up doing some bottom fishing for grouper and snapper so the clients have a fresh seafood dinner to take home with them. The bottom fishing has been pretty good with lots of fish in the 5 to 20-pound range.

In a day of Costa Rica fishing from Los Suenos it has been quite common to catch two or three Mahi Mahi ranging from 15 – 50lbs. while trolling.

The bait has been a little slow showing up inshore here this season which makes it tough to target big roosters. Live bait is the key to catching trophy-sized rooster fish. The bait should be showing up shortly which will make it a lot easier to target them.

Short report this month as I have been slammed so far this season fishing every day. If you are looking to go fishing this season start making plans and reserve early. I get booked solid six to eight weeks in advance, as well as most of the best crews I know. If you want a good Los Suenos fishing charter and crew, do not wait until last minute.