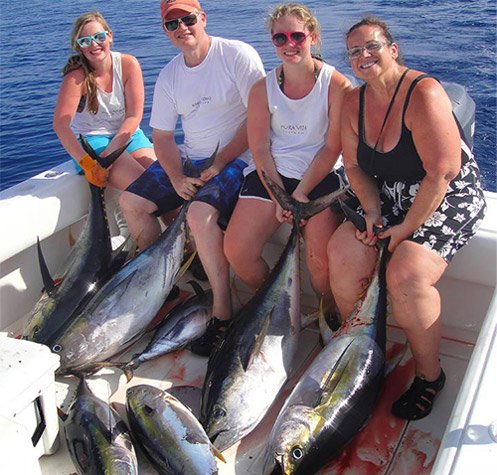 The weather has been ideal here at Los Suenos, making for the best Costa Rica fishing all year. The fishing conditions have been great, flat seas and hot sunny cloudless skies.

Los Suenos had a world-record sailfish bite offshore from late December all through January.

Just after the first week of February, we started to see patches of green water move in and slow the action we had been experiencing a bit.

We went from getting 20-30 bites on an average day in January, to 5 - 15 bites a day throughout most of February. No question we were getting spoiled with the Costa Rica fishing for a while. A month ago we were calling 15 bites a slow day.

The green water pushed the fish out farther, and many days we were going out 35-45 miles for good action, rather than the 15-25 miles that we were running in January. Quick note: This is why it is important to make sure you book a Los Suenos fishing charter that will run the distance required to find fish. You never know when you might have to run 30+ miles to the bite.

Calm and flat sea conditions means the run is not an issue for boats fast enough to make it out there quickly. Charters as big as 32 ft + and capable of at least a 22kt cruise speed or faster is a good starting point. Twin engines are always good for speed, safety and reliability

Now in to March, the water has cleared up, and blue water ripe with billfish are being found much closer in again. There has been lots of bait and birds around, and a few whales make an appearance every few days.

Thus far, March is has been the one of the best months for Costa Rica sailfish fishing over the past few years. Hopefully it will keep up.

The mahi-mahi bite has been just ok in February. Most mahi catches have been made while trolling for billfish, as we haven’t seen much driftwood etc. to target them. The mahi-mahi we have been catching, have been good-sized - typically 20 to 50lbs. Although the Costa Rica mahi-mahi fishing has not been red hot this month, it has been steady, and I expect it will stay the same until things pick up in May.

Marlin have been scarce since mid-December, but should be showing up soon. March is usually a good month for marlin fishing from Los Suenos, and it has been an unusually long dry spell. If you are looking to go after marlin on you Costa Rica fishing trip, now is probably a good time to start planning a trip.

Inshore Los Suenos fishing has been awesome. Sardines and other bait have been showing up and providing a good source for action from a variety of species.

I pride myself on being a top Costa Rica inshore fishing guide here, as such, about half of my trips are inshore trips. Inshore fishing means using several different fishing techniques, rather than just trolling. We jig, cast poppers and lures, catch live bait, and use it for bigger predators. Successful and fun inshore charters are much more involved, hands- on experiences than the billfish charters.

Be sure to shop around for the right person to fish with if you are serious about inshore fishing for trophy rooster fish, ubera snappers, AJ’s or anything else. Not all boats are equal, and to be honest not many are very good or take pride in inshore fishing. In my opinion, it is much more difficult to be consistently productive inshore, than offshore. Many charter crews may have an idea of where the big inshore fish live near Los Suenos, but don’t have the knowledge, gear, tackle, techniques or tricks required to land one.

This last month I have been absolutely crushing the big roosterfish, cubera snappers, amberjacks, as well as several other species. While not as acrobatic and aerial as sailfish, these fish are much tougher fighters pound for pound, and we usually keep enough to eat while releasing the rest for the future.

Inshore Costa Rica fishing from Los Suenos should get even better over the next several months, as bait gets increasingly easy to catch.