Sailfish and Marlin as we Await the World's Top Anglers 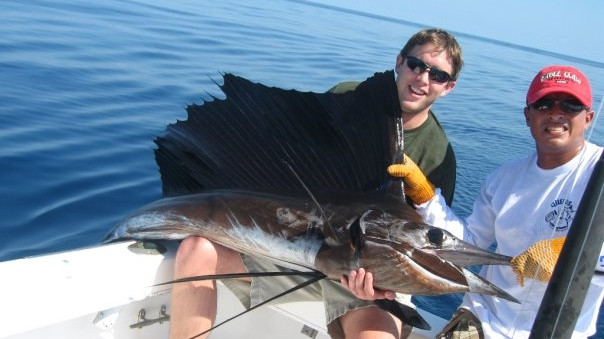 Before the best of big game fishing teams descend on Central Pacific waters, charter boats out of Los Suenos Marina are enjoying the bounty of sailfish season.

As we’re in the thick of the peak sailfish season that began ramping up in January, we’ve been seeing lots of sailfish action offshore. Most days we’re looking at around 20 to 30 bites on average. Occasionally, that has dipped to 15 daily bites, but we’ve also seen days when the numbers jump to an amazing 50 bites a day. If past years are any sign, we expect the nice numbers offshore to hold over the next two months and then begin to decline somewhat in mid-May as we move into the green season.

World Champs on Their Way

Top anglers from across the globe are also expecting these big numbers to hold over the coming weeks. At the end of April, Quepos hosts the prestigious Offshore World Championship. The world’s largest offshore fishing tournament, the annual event welcomes top teams from around 30 countries, who have collectively won over 600 tournaments, to go after big game fish in the Central Pacific.

They’re certainly going after the most-coveted catch of all: marlin. While marlin frequent the waters of the Central Pacific year-round, March and April are particularly good times to hook these magnificent creatures. This favorite catch for those lucky enough to fish these waters is often found both offshore and along the inshore reefs and hooking a massive marlin in the 600-pound range is not unheard of. We’ve also been seeing a nice showing of blue marlin offshore. While normally some of the best marlin fishing offshore is between May and July, throughout March we’ve been seeing solid numbers and are consistently getting around two or three bites a day.

What About Table Fish?

Although dorado season is on the wane, as they’re most abundant from October to December, we’ve still been lucky enough to hook a few averaging in the 30 to 40-pound range in offshore waters. Both their aerial displays when hooked and the fact that they make wonderful meals mean that finding dorado is a treat for most anglers. When we’re not coming across dorado, we can almost always rely on yellowfin tuna. As we’re going for sailfish about 20 miles out, yellowfin tuna in the 100-pound range are showing up. They typically increase in size as the year progresses and we often see yellowfins in the 200-pound range between June and September.

Inshore fishing, often baiting with sardines, has also been a bounty for mackerel, jacks, and our favorite feisty roosterfish. Snapper have been hit-or-miss of late, which is to be expected in the low-density season from January to March, but usually, those numbers rise in April as we head into peak season that begins in July and stretches into December. So we have a good outlook for deep dropping and bottom fishing near the shore in the coming months.

Ready to Hook Some Snook?

We’ve also been fortunate enough to come across some snook of late. Better known as robalo in these parts, the tasty catch is found in our inshore waters. While December and January are typically peak density months for snook, we’ve been landing them in the 30-pound range by live baiting along the inshore reefs. It’s not uncommon to hook one that weighs in at 40 pounds and record-setting snook at a whopping 60 pounds have been caught in Costa Rica’s Pacific waters. While we can’t guarantee a world record, we can assure you a fine meal if the snook is properly prepared. That means removing the skin (which has given the fish the somewhat unfair nickname of “soapfish”) and one of the best ways to go is pan seared and blackened.

Speaking of catches to bring home for dinner, groupers are also great to go after. While bottom fishing in the 400 to 500-foot range we’ve come across groupers in big numbers. They’re usually in the ten-pound range but don’t let their smallish size fool you. They’re a spirited catch when hooked and offer plenty of action for even a seasoned angler.

Fishing charters fill up fast so book your once-in-a-lifetime fishing trip soon to make the most of your amazing adventure vacation in Costa Rica.