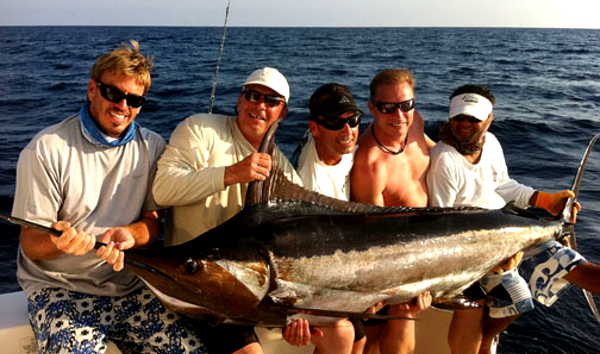 Fishing charters out of Los Suenos Costa Rica are ramping up for a glorious green season that promises marlin and massive yellowfins in big numbers.

As we come to the end of a plentiful dry season, we’re looking forward to the bounties that arrive with the green season. But don’t worry that your charter will get doused by rain. Almost every day in during the green season starts out sunny, see some clouds in mid to late afternoon and in the evenings we have rain for just a couple of hours a few days a week.

Mighty Marlin on the Rise

In April and May, we generally see a rise in blue and black marlin for a peak-density season that runs well into mid-August. This year has been no exception and we’re seeing solid numbers of both with about two or three consistent bites a day. Baiting with bonito and mackerel, along with trolling with brightly colored lures and teasers, we’ve been regularly hooking blues. But of course, the prized black marlin is at the top of nearly every angler’s wish list. The black marlin's tremendous size and legendary strength have challenged even the most-seasoned of fishermen who battle for hours bringing in one of these prized catches. If you want to join the ranks of the esteemed fishermen who have pitted their skills against these mighty creatures now is a good time to book your charter.

While there really isn't an official sailfish season, as they're found throughout the year, we’re easing out of a peak density window that saw an average of 20 to 30 bites a day. On some of our best days, those numbers jumped to 50 and even 60 bites a day. With stunning speed, fighting spirit and amazing acrobatic ability, sailfish bring anglers from across the globe to our Central Pacific waters. While those big numbers traditionally fall somewhat at this time of year, tapering a bit from around May to October, you still have a better chance at hooking one of these magnificent creatures in the upcoming months than almost anywhere else in the world.

Dorado in the Mix

While going after sailfish offshore we’ve been regularly coming across dorado in the 30 to 40-pound range. A fisherman's favorite, dorado are abundant in these waters year-round. During the dry season, we tend to find the bigger catches in the blue water a good distance offshore trolling with ballyhoo and a circle hook and it’s not uncommon to find dorado in the 50-pound range offshore. As we head into the green season we’ll be going closer to shore for dorado, as they’re often found around the debris that’s swept into the ocean by the intermittent evening rains. While these inshore catches tend to be smaller, often in the 15-pound range, they’re just as tasty and one of the best catches to bring home for dinner. Grilled, seared or served as ceviche, mahi-mahi is one of the most delectable table fish you can reel in and Central Pacific waters are always in good supply.

Big Yellowfins on the Way

Although yellowfin tuna are always prevalent in these parts, the past few weeks have seen something of a lull. We're still coming across 100-pounders while going after sailfish offshore, but not in overwhelming numbers. That's to be expected as traditionally we see an increase in their density starting around the middle of May with the peak season for large yellowfins running well into September. Over the summer we're almost guaranteed to hook big numbers of big tuna across a wide range that spans from 30 to 300 pounds. So if you're looking to bring home a monster tuna the coming months are a great time to head out.