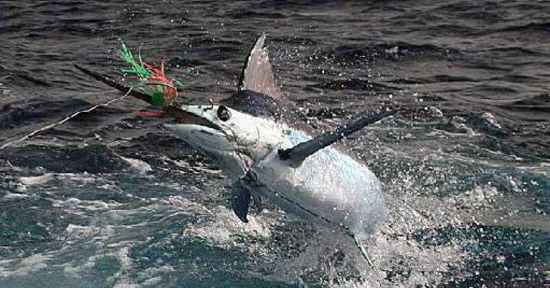 We’re enjoying a glorious dry season in the Central Pacific with seemingly endless days of clear sunny skies and calm waters that make for perfect fishing charters out of Los Suenos Marina.

It’s also peak sailfish time and we can happily report that this season’s bounty has not disappointed. Heading about 30 miles out and looking for the telltales signs of birds scoping the surface water, we’re seeing consistent sailfish numbers between ten to 12 bites a day. We’ve also had quite a few times where those numbers jump to as high as 25 bites a day. As prime sailfish season traditionally runs until June, we expect these numbers to hold over the coming months.

Blue and Striped Marlin in the Mix

While they’re the most common of late, sailfish aren’t the only offshore action. Striped and blue marlin have been popping up in consistent, if not massive, numbers. We’re seeing a handful of daily catches of striped marlin in the 100 to 120-pound range and blue marlin in the 200 to 400-pound range. Fast, acrobatic and given to amazing aerial displays when hooked, these marlins draw anglers from across the world to the waters of Costa Rica. As this time of the year is usually a lull for these prized catches, we’re taking it as a good sign that the coming peak-density seasons will be fruitful.

As expected, mahi-mahi numbers have started to taper off somewhat. While we’re still finding them here and there, the usual trend is that they’ll remain occasional catches over the next few months until they return to peak season in the fall and then stay in big numbers from October to February.

Yellowfin tuna have been more consistent, as is generally the case with this tasty catch that can almost always be found in Central Pacific waters. Starting about 20 miles out we’re encountering the telltale pods of spinner dolphins that often indicate the yellowfins are around. Using rubber squid lures and cedar plugs we’ve been hooking smaller tuna from 20 to 50 pounds and bringing in bigger hauls from 75 to whopping 200 pounders using live bait. Grilled, pan seared or as the freshest-of-fresh sushi, yellowfin tuna makes for one of the tastiest treats you can bring in.

Heading in closer to shore, it’s been all about black marlin. The Central Pacific usually sees a short lull in these dream catches that runs from January to March. Recent results show the seasonal rise is upon us! Live baiting along the shallow reefs we’re averaging about two or three black marlin bites a day. The biggest and most-challenging game fish most anglers will come across in their lives, this almost guarantees you will have the outing of a lifetime with charters out of Los Suenos. On average, the black marlin have been coming in the 400-pound range but it's not unheard of to find behemoths that top up to 600 or 700 pounds by most estimates.


While black marlin are the big-game fish of dreams, the inshore waters of the Central Pacific offer much more to those looking to bring in some delicious meals. We’re talking about groupers of all sizes in big numbers! Deep dropping in the 300 to 500-foot range we’re consistently hauling in good bounties of what many say makes some of the best seafood dinners around. Baked, broiled or pan cooked with a bit of olive oil, grouper offers a mild flavor with a firm-yet-flaky texture that works well with just a hint of lemon and butter. Inshore you can also rely on a steady supply of big cubera snappers, often in the 30 to 40-pound range, as well as mackerels and jacks in nice numbers.

Roosterfish are one of the feistiest game fish catches. Following the traditional lull that we usually see until mid-January, roosterfish have been increasing in numbers and look to remain steady until their usual peak density begins in July. Using live bait we’ve been hooking these iconic fish that frequent the rocky inshore reefs. Prepare for a fight that could last up to an hour once you hook a tenacious roosterfish, with mid-sized roosters in the 25-pound range given to jump and put on a spectacular show.

Charter boats book early so contact one of our agents soon to reserve your big game fishing trip of a lifetime on a Costa Rica excursion you will never forget.