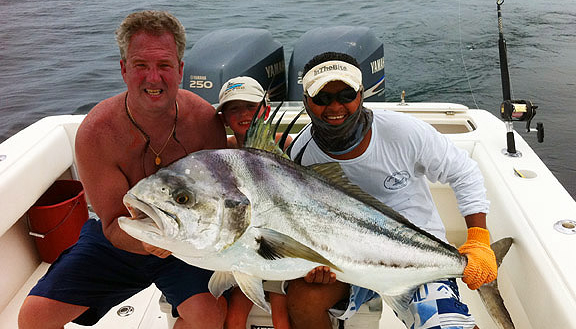 Fishing trips that head out from Los Suenos Marina have been seeing big hauls of mahi-mahi, roosterfish and marlin while offshore fishing.

As we roll through a bountiful green season, we’re seeing the traditional arrival of mahi-mahi in large numbers both offshore and inshore. These colorful fish are given to sudden eruptions of raw speed and make for thrilling catches as well as sumptuous meals. They’ve been steadily increasing in numbers over the month of September and look on track to hit their usual peak in October and November.

But the inshore bounty isn’t limited to those three great catches. While their peak season isn’t until next month, roosterfish have been making a nice showing. These flaky and tender treats of the sea make for delicious meals and we’ve been getting them in good numbers around the rocky inland waters. These same waters have been providing nice hauls of red snappers, jacks and small wahoo, which are currently in their prime season and make for a mild-sweet treat for every angler’s dinner table.

While inshore bottom fishing we’re finding lots of snowy groupers, another mild-sweet fish that’s flaky and delicious when prepared any number of ways, from roasting to grilling and in ceviche. Our inshore fishing is also landing us rose fish and tilefish in the 30 to 50-pound range that gather along the inshore reefs.

October and November are great months for marlin and sailfish. Both blue and black marlin have been found in offshore waters. Ranging from 150 to 300-pounds, these fantastic fighters are powerful, fast and on the wish list of nearly every fisherman. While moderate now, sailfish numbers normally increase over November and stay strong through December and January.

Prevalent throughout the year in the Central Pacific, we’re seeing consistent hauls of yellowfin tuna in the 100 to 200-pound range. Spotting pods of porpoises offshore we’re bound to come across tuna feeding with them. These tasty fish typically hit peak density starting in January so the numbers we’re seeing are a positive indication of the months to come when reeling in 400-pounders isn’t uncommon.

Make big game fishing a part of your adventure travel and contact us to book your once-in-a-lifetime fishing charter today.