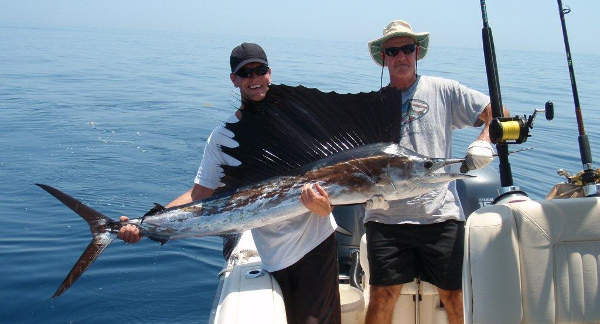 As we near the end of a glorious green season, mahi-mahi, sailfish, and marlin have been seen in peak numbers by fishing charters out of Los Sueños Marina.

Offshore Fishing for Marlin and Sailfish

We’re heading into prime marlin season that peaks in November and December and trolling in open water you can generally encounter the much sought-after fish. Coveted prizes for most anglers, blue and black marlins have been seen in steady numbers offshore. These powerful and elusive warriors of the sea have been ranging from 150 to 300 pounds.

While sailfish usually hit peak numbers from Christmas to Easter, we’ve been seeing a nice showing of late and our charters have been getting anywhere from two to ten sailfish bites on each outing. Mid-November is traditionally the time when sailfish numbers begin to increase and current catches indicate that this year will be particularly bountiful.

Surface-dwelling mahi-mahi in the ten to 20-pound range have been making an especially good appearance. Strong, swift and given to spectacular aerial shows when hooked, their magnificent hues of greens, blues and yellows are only outmatched by their delectable flavor. You can usually count on mahi-mahi in big numbers from October to January in the 20 to 50-pound range.

With the yellowfin season winding down over the next two months, we expect to see them in lesser density but still come across a decent number in the 100-pound range as were fishing for mahi-mahi, sailfish, and marlin.

A Trove of Tasty Inshore Catches

Biting in the 350-400 feet depth range, rosefish, snowy groupers, and tilefish have also been plentiful. Native to the waters off of Costa Rica on both the Atlantic and Pacific sides, snowy grouper make meals that are not to be missed. With a mild-sweet flavor and light flaky texture, the tropical-water-loving fish is perfect for grilling, roasting or in ceviche. Tilefish feed on shrimp, crab, and other crustaceans. This diet gives them a sweet taste with distinct nutty overtones while their flaky white texture combines to create excellent dinner fare.

We’ve also been coming across a good showing of wahoo while trolling the inshore reefs. Common in the ten to 30-pound range, they should stay in steady numbers through December.

Often booked in advance, best to contact us and reserve your charter boat fishing spot now. Whether you’re a seasoned angler or a novice looking for adventure travel, big game fishing is an excellent way to spend a day on your Costa Rica excursion.