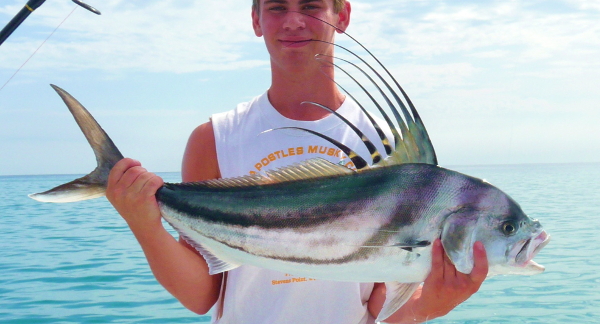 Heading out from Los Suenos Marina, fishing spots close to shore have been teeming with roosterfish and black marlin, while offshore fishing is bringing in hauls of yellowfins.

Recently we've been seeing a lot of inshore action with roosterfish. Strong fighters when hooked and tasty when cooked, roosters have been making good showings both around the inshore reefs and lurking under the flotsam close to shore that's common during the green season. While most are in the 30-pound range, hooking an 80-pound roosterfish isn't unheard of. Along with red snapper, roosters traditionally hit their peak inshore density as we near the end of the green season in October and November.

Other inshore bounties include jacks, small yellowfins and black marlin in nice numbers. One of the fastest game fish in the sea, black marlin are thrilling foes that can hit speeds of up to 80 miles per hour and are much sought after by anglers of all levels. While bottom fishing along inshore grounds, we've been hauling in lots of grouper. Making for delicious meals, groupers have been averaging about 20 or 30 per charter.

Heading offshore, we're seeing healthy numbers of mahi-mahi. While October and November are traditionally the peak times for these delicious catches, things are looking strong as we head into September. Beyond making for wonderful meals, the always acrobatic mahi-mahi put on aerial shows and create exciting catches. September is also a prime time for wahoo and we've been seeing them in high numbers as expected.

The big offshore sportfishing action has been sailfish and blue marlin. While the elusive blue marlin bites have been sporadic, sailfish have been steady. About 40 miles offshore, we're finding large yellowfin tuna, spotted with pods of spinner dolphins and birds that feed from above. We've been successful using live bait and casting poppers on spin rods. The yellowfins have been averaging in the 40 to the 80-pound range but tuna as large as 150 pounds have been hooked.

This year's green season has been just that. The coastal forests are alive with lush vegetation and we've been seeing calm, flat seas with flotsam that creates fertile fishing grounds. Cooling rains come in late afternoons but most days we've been seeing sunny skies and perfect conditions. Fishing charters book in advance so now’s the time arrange your trip to Costa Rica and set off on the big game fishing adventure of a lifetime.