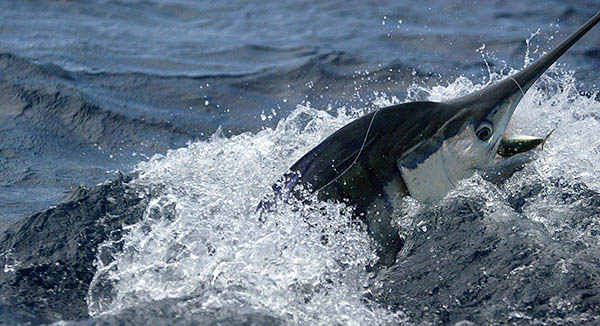 As we roll into the dry season that promises clear, sunny skies over calm seas, fishing charters out of Los Sueños Marina are the perfect choice for your trip to Costa Rica.

December also marks the arrival of sailfish in abundant numbers that ramp up over the next few weeks and continue in solid density until April.

Those looking to hook marlin are in luck. While we have consistently seen Striped Marlin and Black Marlin offshore, Blue Marlin have by far been the most abundant of the big-game catches. We’re seeing up to six a day in the 150 to 400-pound range. Fast, fierce and given to powerful aerial displays, marlins are a must for any angler and should be around in steady numbers over the next few months.

Meals of Mahi-mahi and Wahoo

If you’re looking to haul in a tasty dinner, the Mahi-mahi we’ve been encountering offshore should satisfy. Yellowfin Tuna also make wonderful meals and we’ve been seeing them in the 30 to 50-pound range. While plentiful throughout the year, the dry season is a particularly good time to go after tuna. We’re also heading into the prime season for Wahoo, regarded by many gourmets as one of the tastiest fish in the sea.

Inshore Bounties of Roosterfish and Snapper


Using live bait and casting poppers, we’re seeing Cubera Snappers in nice numbers around the inshore reefs. We’re also bringing in nice hauls of Jacks and Sierra Mackerels. But one of the biggest delights has been the rise of Roosterfish. Recently the waters off of the islands in the Gulf of Nicoya have been fertile grounds for finding Roosterfish in the 50 to 80-pound range.

Now that the green-season rains have subsided, the number of fishermen looking to set off from Los Sueños is on the rise. Best to contact us and book your fishing trip now to enjoy the Costa Rica excursion of a lifetime.