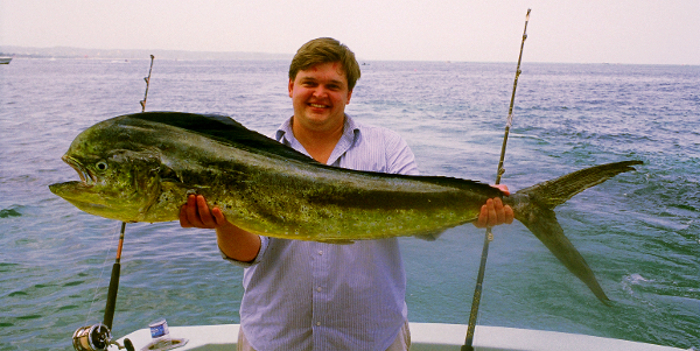 As we hit the midpoint of Costa Rica’s green season, we’re seeing both fantastic big game fishing offshore and inshore bounties out of Los Suenos Marina.

While some call the period from May to November the “rainy season,” that's not entirely accurate. Green season is more fitting. Your charter is almost guaranteed to see clear skies in the morning and afternoon. You can expect some rain in the early evening. And that’s a good thing! The debris that flows from Costa Rica’s lush forested terrain gets carried out to sea and creates great sites for reeling in big catches.

While trolling offshore we’re coming across clusters of floating debris and almost always find treasures lurking underneath. Small Yellowfins, Mahi-Mahi and Bonitos like to find cover under the flotsam and they attract prized Marlin. As this is a good time of the year for Blue and Striped Marlin, we’re seeing solid bites each day around the floating cover.

A tasty fish that seems to be in endless supply in Costa Rican waters, Yellowfin Tuna have been biting on a near-daily basis. Using artificial lures we’re catching tuna in the 20 to 40-pound range with regularity. Larger tuna have been spotted traveling with pods of spinner dolphins and we’ve been seeing catches of tuna in the 100-pound range using live bait. Hauling in a huge 150-pounder isn’t unheard of.

Speaking of fish that make for delicious meals, an abundance of Mahi-Mahi have been found around floating debris as well. While many aren’t large enough for harvesting, we have been reeling in bigger ones and the sheer number is a good sign for peak Mahi-Mahi season this fall.

As one would expect for this time of the year, Blue and Striped Marlin have been biting. We’ve been seeing consistent catches of Striped Marlin in the 100-pound range and Blue Marlin at around 300 pounds and higher. This is also a good indication that the regular season from September to January will be bountiful.

The green season is an especially good time for inshore fishing. Around the flotsam close to shore we’re finding Snappers, Jacks, Mackerels and Roosters. It’s not uncommon to find small Yellowfins and Wahoos in the 25-pound range. Using live bait by the inshore reefs has also snagged a few prized Black Marlins. These massive and magnificent creatures put on amazing aerial shows that are the stuff of every angler’s dreams.

Fishing charters book early so contact one of our agents soon to reserve your spot on a Costa Rica fishing adventure of a lifetime.