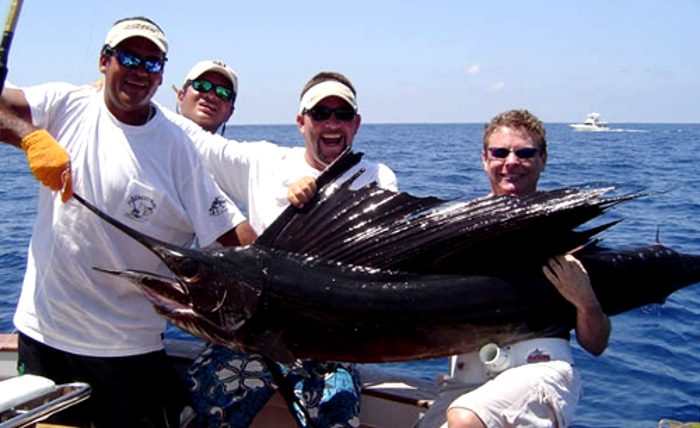 With sailfish season upon us, now is a great time to book a charter boat and embark on a saltwater fishing adventure out of Los Suenos Marina. We’re also enjoying a glorious dry season in Costa Rica with clear sunny skies, calm seas and warm temperatures that combine to create perfect days at sea.

As we head into peak sailfish season, we’re currently seeing a boom with around 20 to 25 bites a day about 30 miles out. The currents and ocean temperatures usually bring more sailfish and marlin to Central Pacific waters in February, March and April. This year already shows signs that it won’t disappoint. Much like last season, we’re expecting to average about a dozen sailfish bites each day over the coming weeks. If past years are any indication, we could be looking at some days when we hook 40 sailfish a day!

Consistent throughout the year, yellowfin tunas have been showing up in nice numbers about 20 miles offshore. Using artificial plugs, we’re getting good hauls in the 20- to 50-pound range as they travel with spinner dolphins. Using live bait, we’ve been bringing in yellowfins in the 50 to 150-pound range. Even though it’s not the peak season for mahi-mahi, we’re still hooking a few of the tasty fish in the 25 to 50-pound range most days.

Showing up in consistent numbers all year but not always targeted, we’ve been landing some ever-elusive wahoo in the 50-pound range while trolling rocky points offshore. As a general rule, if you’re looking for sailfish you’re apt to come across wahoo. They may not put on sensational acrobatic shows of sailfish, but their mild taste and lean texture will be appreciated when you are making a meal.

January was particularly good for finding striped and blue marlin offshore. While we don’t expect these unusually big numbers to stay as consistent through February, the abundance of late tells us that they will both be pretty common to hook over the next few months. In the 150 to 400-pound range, blue marlin have been an almost daily find, as have striped marlin in the 100-pound range.

Inshore bounties have offered a mix of both big and small catches. On the larger side, we’re having luck hooking black marlins close to shore. Often in the 400-pound range, these magnificent creatures put up amazing fights with thrilling aerial displays and are the highlight of most angling excursions. We’ve seen success live baiting along inshore reefs, getting two or three black marlin bites a day. This is a good sign of things to come as black marlin are known to increase close to shore in these waters in the months leading up to April.

Small to mid-range roosterfish have been plentiful in shallow waters including just beyond the breakers. Deep dropping close to shore we’re also seeing groupers in nice numbers. What they lack in the drama of the marlin they more than make up for with taste. Fried, blackened or served in ceviche, the tender white meat of grouper makes meals that are not to be forgotten.

In shallower waters, we’ve been hauling in good numbers of cubera snappers, another fish that doesn’t disappoint on the dinner table. Similar to red snapper, cuberas have a sweet and mild white meat that’s delicious when grilled or fried and served whole. Mackerels and jacks have also been common close to shore.

As migration patterns bring in prized catches such as marlin and sailfish, the next three months are a popular time for serious anglers to venture out into Central Pacific waters. Fishing charters fill up fast so contact one of our agents soon to book a big game fishing adventure that’s sure to be an unforgettable highlight of your trip to Costa Rica.