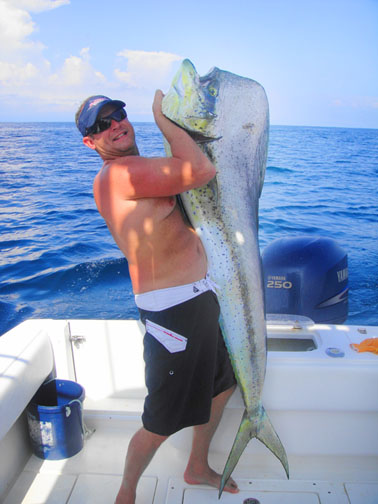 October is finally over, and the weather is returning to the typical dry-season weather that makes us all love Los Suenos Fishing. For the past week it has been sunny and warm with flat seas, and barely any rain – great Costa Rica fishing!

The water is turning clear and blue again offshore, and not far off the beach the sailfish bite is picking up. Boats are seeing 8 to 12 sails, and catching 4 to 8 in a day.

The main bite has been about 30 miles out from Los Suenos Marina. A few marlin have been caught in the past week not too far from the sailfish action.

Tunas have been scarce, but are sure to return soon as there were plenty of big ones around just the week before.

There have been a good number of dorados (mahi-mahi) getting caught. The dorado bite looks like it’s going to be good this season after a less-than-stellar year last year.

Inshore the roosterfish action remains consistent. I know of one huge cubera snapper caught in the past few days.

I had The Contender out of the water last week to get ready for season. However, I did get a chance to run a trip on it yesterday. The people said they were interested in catching something to eat, like tuna or dorado (Mahi-Mahi). I love chasing tunas and throwing poppers and live bait to catch big ones.

Mahi are not usually something I pursue because I catch plenty of them while trolling for sails and marlin. This time of year if you are looking specifically for mahi mahi around here, your best chance is staying a little inshore (under 20 miles) and trolling the current/ trash lines coming out of the gulf of Nicoya.

We can often find lots of small 5 to 20 lbs mahi hanging around floating debris. However, this area is too close in for the main sail bite, or to have a good chance at catching a marlin. You might catch a billfish or two while trolling the trash lines occasionally, but you won’t be in the main concentration of fish.

As I was saying, the clients wanted dorado (mahi-mahi). We started trolling around a trash line about 18 miles out where there were lots of branches, logs, some trash, and even some trees being clumped together by the current. I saw a few mahi- mahi swimming under some debris. I trolled by them, and they rushed out and attacked the baits. We had two on, but jumped one off and caught one about 25 lbs. My mate quickly cleaned the fish as i headed offshore in pursuit of bigger game. When my mate cut the dorados stomach open to see what he had been eating - he was surprised to find two baby sea turtles and a plastic comb in the fish’s stomach!

I started trolling again a little after 10am and within an hour we had raised 4 sailfish, caught 3, and jumped one off. Two of the sailfish were a doubleheader which is when you have two fish hooked at the same time. By 11:30am the clients said we could start heading in, that they didn’t want to catch any more sailfish ( I think they were a little hungover from the fiesta the night before).

On the way back we came across a large floating tree so I stopped to take a look. It was a tangled mess with a bunch of old long line gear wrapped around it, and a few sea turtles tangled up in the mess. Underneath the mess I could see the neon green of some mahi swimming, and one of them looked pretty big.

Casting poppers and ballyhoo to them we quickly hooked a 20 pounder on a popper. The large mahi I saw followed the hooked fish as the clients reeled him in. We cast a ballyhoo to the big one following, and he quickly took the bait. once he jumped, we could see that he looked to be about 6 ft long! The clients fought him for about 30 minutes on a spin rod before getting him to the boat. He was definitely a big one - Almost 70 lbs!

After the excitement we freed the two sea turtles of the mess they were tangled up in before heading back in.