Green-Season Fishing is on with Capt. Mike Alligood 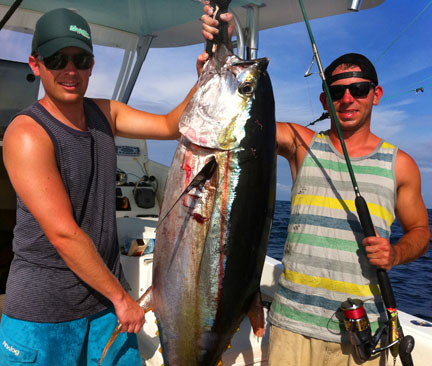 The rain finally came to a stop this week and gave us some truly beautiful sunny days, and flat and calm seas to get offshore and see what was biting. It did not seem like the middle of rainy season Los Suenos Fishing at all.

All the rain from the tropical storm in the Caribbean over the past few weeks really pushed a lot of debris out in to the ocean - logs, branches and even some big trees were scattered everywhere.

The rain washing through the mountains also means dirty water. The clean blue water was pushed about 45 miles offshore for most of the week.

The incredible off-season sailfish bite we were experiencing before the rain has seems to have dissipated, but there were still a few around. Some boats were seeing one to three a day throughout the week, but that is down from the 8-15 we were seeing a couple weeks ago.

Two marlins were caught this week, but only about three charters of Los Suenos were fishing per day, so I am sure there were more out there. October and November are typically good months to catch Black Marlin here.

Early in the week the dorados (mahi-mahi) were thick, boats were catching a lot of 30 to 50-pounders while trolling around all the scattered logs that these fish like to hang under.

The tunas were also thick early in the week. Several boats were catching 10-12 yellowfins, but
by Thursday things had slowed down a bit.

I fished offshore with four guys aboard the Contender on Friday. We started fishing about 25 miles out. The water was a dirty green-brown. We ran through miles of floating wood on the way out, and continued to troll through it for about 20 more miles offshore to the west looking for tunas.

We passed through an area with tons of bonita, so many that we had to pull the baits out and just troll teasers until we were out of them. They were not out target species - we wanted some yellowfin. We did raise one sailfish in the area, but he didn’t want to bite.

The water got a bit better in a few spots, but was still greenish 45 miles offshore. In that same area we finally found a small pod of spinner dolphins.

After we made about 100 casts with the poppers, we only saw a few small yellowfins. At that point it did not look too promising. About that time my friend Capt. Dean radioed to let me know he had caught a couple tunas from another pod of dolphins about 10 miles away. I got up and ran the distance to find two boats working a slightly bigger pod.

I noticed that the porpoises were on the move, so I pulled alongside them. We did about 15kts with them, my mate cast a popper out front, and we were on in an instant! When he handed the rod off and cast again he landed- double header! We pulled one off and boated one that was about 40lbs. We ran up alongside again, and another double! This time we boated both of them.

On our next run, the clients made the cast. The popper landed right in the middle of the porpoises, and on its first “pop,” it disappeared in a huge hole in the water. An hour and 15 minutes later, we got this one in the boat (pictured) - about 150 lbs – a real nice catch on spin gear and popper with the client casting and hooking his own fish. He made my day!

Until next week -Tight Lines!