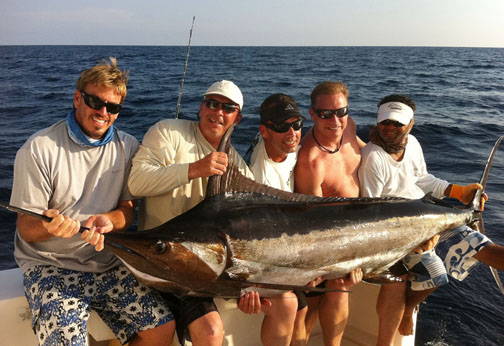 The weather has been beautiful this week - lots of sun, and lots of boats starting to go fishing from Los Suenos every day. It looks like the beginning of a great season.

Offshore, the water has really cleared up from a couple weeks ago. Beautiful, clear blue ocean water has pushed in under 20 miles from the beach and so have the game fish.

Lots of dorado are being caught, many while trolling open water. If you can find some good floating debri - a big tree or stump - you can catch a bunch. You may also be able to catch a nice tripletail in the same areas.

The sailfish and marlin have moved in closer. Most of the action has been centered around the edge of the bank on the corner which is about 20-25 miles from Los Suenos. This is right around where your depth drops from 400ft in to the abyss.

Boats from the Los Suenos fleet have been seeing 5 to 15 sails per day on average. There were a couple days around the full moon when the fish seemed a bit finicky. Many of them came up on teasers and went away without wanting to take the bait, but there are plenty around that will be getting hungry real soon.

Also, almost every boat going out the full distance is seeing at least one marlin per day which means they are starting to show up in force.

Late November can be red hot marlin fishing here. It is not uncommon for the marlin fishing to get so good that an experienced boat and crew may catch 8 to 15 striped, blue, or black marlin in a single day

Inshore, the roosterfish action has been good across the gulf of Nicoya. Isla Negritas and Tortuga Island is your best bet for catching a trophy fish.