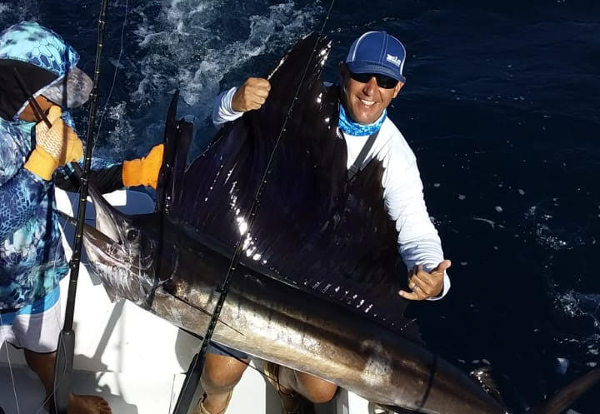 Fishing charters out of Los Suenos, Costa Rica have been bringing in marlin that gather around seasonal flotsam, steady sailfish offshore and inshore bounties of roosters and cuberas.

It’s common for the marlin to be biting at this time of the year and the past few weeks have stayed true to the marlin season we generally see in the Central Pacific waters. Most of the action has been offshore where we’re hooking about one to three blue or striped marlin per trip.

We can thank the Green Season for much of our luck with big game fishing of late. As the coastal rains sweep debris into the sea, it clusters and provides cover for small yellowfins, baby mahi-mahi and bonitos. These baitfish are almost guaranteed (not always, but pretty often) to bring in the marlin that feed on them. Unfortunately, most of the mahi-mahi are too small to harvest so we’re waiting for the bigger ones to arrive in their peak season that starts around October.

Looking ahead, if trends over the past years hold, we’re expecting marlin numbers to increase starting in September and holding steady until January. It’s then we usually see more blue and striped marlin out in offshore waters.

The term “sailfish season” can be misleading. Yes, we do tend to come across more sailfish from January to April, as that’s traditionally the peak density time. But you can usually find sailfish out of Los Suenos at any time of the year and it looks like that season’s peak has been extended judging by our recent luck.

Trolling for sailfish in-season often sees about two to five bites per day. You can sometimes even get up to ten bites a day during peak sailfish season. While we haven't been seeing those extreme numbers, lately we’ve been getting around three bites a day, and sometimes up to five. The action is largely at the drop-off of the continental shelf about 25 or so miles out of Los Suenos Marina.


Well, this is a good time to go after roosterfish, a feisty catch that always makes a worthy opponent. We’ve been finding roosters in the 75-foot range by live baiting close to shore. Other catches among the inshore reefs have been less consistent, but we’ve been landing mackerel, amberjacks, small yellowfins and large cubera snappers. Strong fighters that live among the rocky reefs, cuberas can come in at 50 pounds and their light white meat that has a texture that’s like chicken make it a wonderful meal almost any way it’s prepared.

What’s a good time to find tuna in the Central Pacific? Anytime! True, but there are variations in what and where we catch. From May to November is typically when we see the bigger tuna in bigger numbers. And this peak tuna fishing looks so far so good! Live baiting we’ve been regularly hooking tuna in the 100-pound and over range.

But going after the monster catches doesn’t always mean the biggest meals on the dinner table. Tuna in the 20 to 40-pound range have been plentiful and we’re hauling them in with relative ease using artificial lures like rubber squids and cedar plugs. So pound for pound, going after the smaller tuna (even “footballs" in the 10 to 20-pound range) has been a good tactic for anglers after big hauls of delicious table fish.

How Rainy is the Rainy Season?

As many know, the “green season” in Costa Rica is also called the “rainy season” because, well, it rains. But we’ve seen the sun almost every day this past month, with mornings that start out sunny and brief rains that fall in the late afternoon and evening. We’ve only had a few days where rain and wind cut into our fishing time and otherwise, most of our charters have seen calm seas and clear skies.

So if you’re planning a Costa Rican vacation in the Jaco Beach or Los Suenos area, best to contact an agent and book your big game fishing trip today as charters fill up fast and you don’t want to miss out on an opportunity that most anglers only dream of.