Bring on the Billfish! 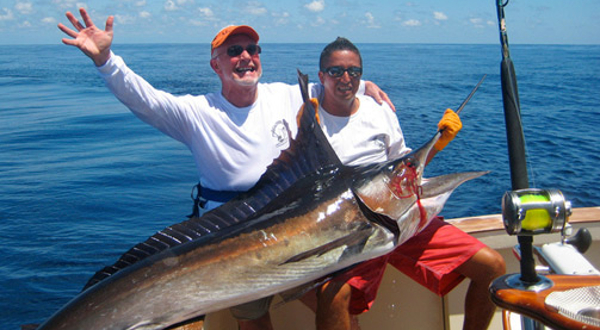 With the rains of the green season well behind us, you can count on clear skies and calm waters for fishing charters out of Los Sueños Marina to catch billfish, yellowfins and mahi-mahi, among the many wonders of the sea.

From January to April is traditionally one of the best times to hook billfish as their migration patterns change and they tend to show up in the highest densities during these months. And they have been turning up in big numbers of late. So far, the billfish bites have been averaging around 15 a day and there are no signs of it slowing down!

December is traditionally when we start seeing more Blue Marlin in Central Pacific waters and this past month was no exception. Now is also a great time to hook Striped and Black Marlin and their numbers look to increase over the next few months. The fierce fighters have been bringing anglers to this region for years with hopes for hooking one of these magnificent creatures.

Beyond catch-and-release sportfishing, venturing to these amazing waters also offers the chance to put something tasty on the dinner table. While the biggest yellowfins are usually found between May and October, we’re happy to report that big tunas have remained in consistent numbers as we roll through the first half of the dry season.

We’ve been having luck using small lures to troll the edges of pods of spinner dolphins for smaller 20 to 40-pound yellowfins. Using live bait, we’ve been coming across larger ones in the 60 to 100-pound range offshore. Loved for its firm and meaty texture, yellowfin tuna is often enjoyed as sushi. But it’s equally delicious when oven baked, grilled or pan seared.

January is a good time to try your luck at landing mahi-mahi. While during the green season we tend to find them in big numbers inshore under flotsam, these days we come across more mahi-mahi offshore, where they tend to be bigger. Fishing for sailfish, it’s common to find some nice mahi-mahi in the 20 to 50-pound range and larger. The strong numbers of mahi-mahi also mean we’ve been seeing good numbers of the fish that feed on them, such as Blue Marlin.

The acrobatic performances that mahi-mahi display is only matched by their savory taste when prepared in a fresh-from-the-sea meal. If you like your fish grilled, mahi-mahi is a great choice. With a firm texture, the lean fish won’t come apart under the flames of the grill. The mild-flavored fish is also great when baked, broiled or sauteed.

Both close to shore and farther out we’ve been finding lots of wahoo, often while trolling in open water for billfish. It’s also not uncommon to come across a 50-pound wahoo, which are loved by fishermen for both their amazing speed and for having the makings of a gourmet meal. This is another meaty fish that holds up well under grilling and also tastes great when sauteed, baked or broiled.

While inshore fishing, we’re not surprised we’ve been seeing good numbers of roosterfish, cubera snappers and amberjacks as their numbers traditionally increase in the run-up to peak density in February and March. Also, while bottom fishing at the 300 to 400-foot range, we’re seeing nice catches of snowy groupers in the ten to 15-pound range and silk snappers up to 20 pounds. Cooked in a pan with olive oil and sea salt, both groupers and snappers make for wonderful meals.

These amazing saltwater fishing adventures often book well in advance so contact one of our agents soon to reserve a once-in-a-lifetime fishing trip that’s sure to be a highlight of your visit to Costa Rica.