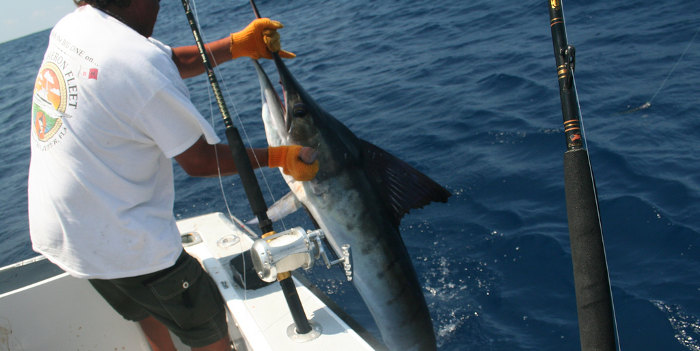 Set off from Los Suenos Marina to encounter a bounty of yellowfin and world-class big game fishing during Costa Rica’s green season.

As we cruise through the glorious green season, yellowfin tuna have been making a good showing. By spotting birds hovering and diving above pods of spinner dolphins, we're able to locate substantial schools of the tasty treats of the sea. Catches have been averaging in the 50 to 60-pound range though we have hooked larger tuna that tend to show up more in the coming months when yellowfin season is in full swing.

As expected, marlin have also been making a strong showing and should continue to appear in good numbers over the coming months into December. Live baiting with bonitos and small tunas, we're getting five or more bites a day of blue and black marlin in the 200 to 350-pound range. Given to explosive bursts of power and spectacular aerial acrobatics, blue marlin are one of the most challenging foes an angler can face. Smaller striped marlin that we see year-round have been consistent as usual.

As the season's evening rains continue to sweep debris from the forest to the sea, we're getting ample opportunities to hook fish that find cover under the flotsam. Beyond the big yellowfins, it's not uncommon to come across massive schools of small tuna in the five to 20-pound range. Dorado in the same size range and numbers are also found under the cover. If there's a floating log, there's a good chance a tasty dinner is lurking underneath. While some anglers find these extremely fast fish a nuisance as they’re searching for billfish beneath the schools, dorado make for one of the more delicious meals you can reel in.

Inshore fishing along the deeper reefs has consistently brought in small tuna, jacks, silky snappers, wahoo and bonitos. Two notorious fighters have proven abundant. Amberjacks have been bending quite a few rods as they're reeled in, while roosterfish found in the shallows by rocky outcrops have made for exciting catches with the fights they put up when hooked. We've also snagged a few sails and marlin when live baiting around inshore reefs.

And what about the green-season weather? While the months from May to October are also known as the rainy season, there's little need to worry that your fishing trip will get rained out. Most days see lots of sun in the morning with some cloud cover in the afternoons. The rain that falls does so a few times a week at night and brings somewhat cooling weather that most visitors find pleasant.

On the horizon, we're awaiting the big numbers to dorado that begin to arrive in August and swell from September to December. We also expect the big tuna to arrive at this time, along with sailfish in stronger numbers.

Charters book well in advance so don’t wait to contact an agent to reserve your trip. From seasoned pros to newbies, offshore fishing is one best things to do in Costa Rica.