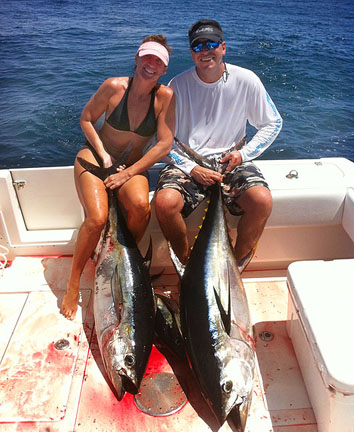 The rain let up a bit this week and several boats managed to get out of the Los Suenos Marina. Costa Rica fishing offshore continued to be good.

The best bite right now is about 40 miles from Los Suenos - a bit to southwest of the craters. There was still a steady number of sailfish being caught, with most boats averaging 3 to 6 sailfish per day.

In that same area, there were also a couple marlins caught during the week. The tunas were out and several large yellow fin tunas between 150 & 200 lbs were caught this week.

Inshore fishing has been above average. One boat caught five roosters off the point between Jaco Beach and Hermosa Beach on a full-day fishing charter during the week.

Half-day trips were averaging two roosters per trip. On this side of the Gulf of Nicoya, most rooster fish have been averaging about 15-30lbs.

This week not many boats have been running across the Gulf of Nicoya due to the weather. Roosters on the other side of the Gulf average 40-50lbs.

Until next week - Tight Lines