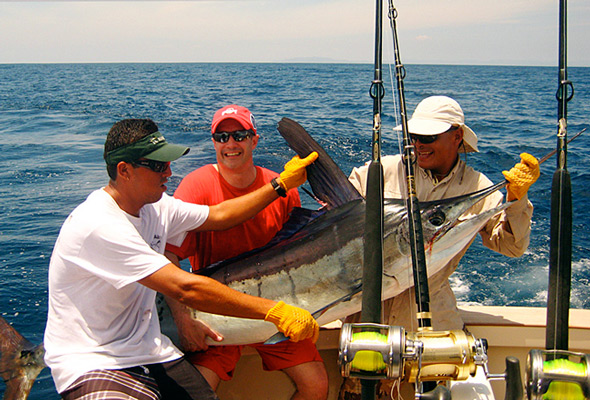 The Los Suenos fishing weather here has been sunny and almost cloudless with temperatures in the upper 80’s. December marks the start of the Costa Rica fishing’s dry season which brings the arrival of Sailfish and plenty of Marlin fishing as well.

The Sailfish have been around with about two to five caught per day. December to April is the peak time for fishing billfish in Los Suenos. You’ll get plenty of bites just 20 to 30 miles from the marina. Of course, there are days you will get no bites at all but this season has looked promising.

Besides Sailfish, we have been getting bites from 150-400 pound Marlin. They are mostly Blue Marlins, but we’ve seen some Black Marlin and Stripped Marlin as well. There have even been some Grand Slams which is when you catch three different bill fish species in the same day.

Mahi Mahi fishin is back offshore like usual, but this year they have been biting inshore even more than before. This is a great chance to catch a delicious dinner with 20-40 pound gaffers.

The Wahoos have been from 30 to 50 pounds. They usually can be found around here until the start of the New Year. You can catch the Wahoos with the 5-15 pound baby Yellow fin Tuna, Skipjacks, and Bonitos. This is also great bait for Sailfish, Cubera Snappers, and even Black Marlin.

From December to May, the reefs and other high spots near Hermosa Beach are ideal Costa Rica fishing with live bait and casting poppers to get the Jacks, Cubera Snappers, Sierra Mackerel, and AJ’s. Across the Gulf of Nicoya near Isla Negrita you can catch 50-80 pound Rooster Fish.

To enjoy Costa Rica’s famous sport fishing make sure you choose the right charter boat and crew. Personally, I prefer and use a walk-around design comfortable for five or six anglers, it’s quick, and rigged with a large assortment of spinning gear and jigging. This is a great day of fishing for a serious angler.

Dry season means more visitors so it’s recommended that you book your trip as much as a month in advance, especially if you plan on fishing from Los Suenos between January and April.