Fishing charters out of Los Suenos Marina have been seeing serious sailfish numbers offshore, plus lots of roosters and black marlin in the inshore mix.

Things have been pretty busy, as we would expect from this time of year in these parts, with the usual calm seas, sunny weather, and the influx of sailfish that migrate closer to our shores that we see in January and February.

The Triple Crown Came and Went

So what went down in the first round of the Signature Triple Crown Tournament? On the opening leg, from January 15th to the 18th, we saw 180 anglers head out on 38 boats. Over the first run, they released a combined 593 billfish: 523 sailfish and 70 marlin. We also saw a ton of dorado being brought back for dinner. Now we’ll get something of a breather until the next round of the event kicks off on February 26th and runs through the 28th. Tournament time takes over again from March 25th to 28th. In between, amateur and pro anglers alike are heading out and bringing in big hauls.

You’ve probably heard that phrase before if you’ve ever fished the Central Pacific waters off of Costa Rica. And “peak billfish season” does run from December to April as most people say, hence the big tournaments. And hence the term “Billfish Capital of the World” getting rightly applied to Los Suenos. But, just like with yellowfins, there are always billfish around so “peak” is a relative thing. More, sure, bigger, yeah, but not something that would drastically change your experience if you are going for billfish at other times of the year, say, November or May.

That said, things have been pretty “peaky” lately, though we are going out a good way to find the best action. Heading out about 35 miles and beyond, most good days we’re looking at around 20 to 30 sailfish bites per day. It varies, of course, some days we’re getting between ten and 12 bites a day, and mostly we’re seeing a mix of striped and blue marlin. The striped marlin have been averaging around 100 pounds, plus some juveniles we’re finding at around 30 to 40 pounds. The blues have been in the range of 150 to 300 pounds, with a few 400 pounders here and there. 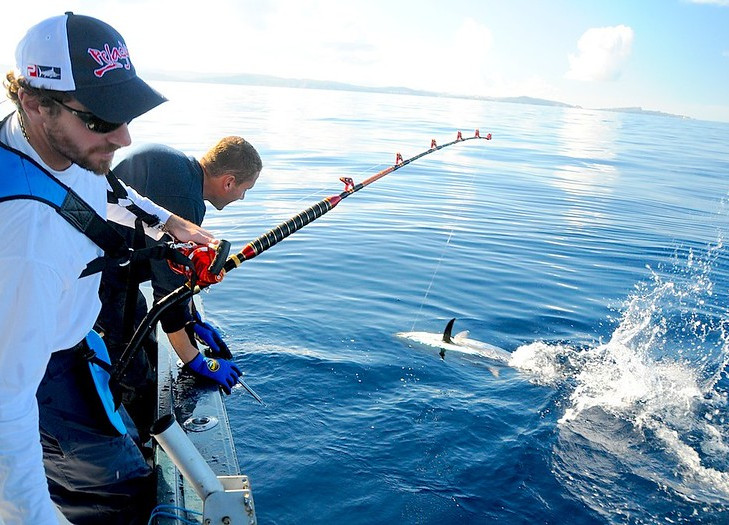 Always around if you look for them, yellowfin action has been good. But not great. We’re not seeing the serious numbers and bigger sizes we get in the green season. Still, the dry season hauls have been decent and you can always rely on bringing home wonderful table fish if you’re going for tuna. When we do focus on tuna we’re heading about 20 miles out and beyond, keeping an eye out for pods of spinner dolphins that are out there. Once we come across them, using rubber squids brings up lots of “footballs” in the 30 to 40-pound range. Bigger tuna, even though this isn’t the peak density season for them, are often hooked using live bait.

As for other table fish, we’re getting a decent number of dorado. January was a solid month as far it goes, but traditionally the numbers start to fall off in February and we’re expecting a lull before the dorado action swings back in full force this fall.

When we’re talking about inshore fishing, almost nothing gets anglers excited more than roosterfish. Their immediately recognizable dorsal fins get everyone’s attention as they cut through the surface going after baitfish. True, not everyone thinks roosters make the best table fish. Some love its strong flavor, others not so much. But everyone agrees it’s a feisty catch that puts up one heck of a fight on the line. While they can get up to 80 or 90 pounds, more often we see them in the 40 or 50-pound range, which is what we’ve been coming across lately when working along the rocky inshore reefs.

While, of course, we don’t see them in numbers like roosters, black marlin have also been common along the reefs. When we’re targeting them with live-baiting in the shallows, we’ll generally see about two per outing. The most sought-after catch in the ocean that tops pretty much every angler’s wish list, these magnificent creatures are usually about 400 pounds, and up, and put on amazing acrobatic displays that no fisherman will ever forget.

It’s the perfect time to book a big game fishing trip in Los Suenos, so contact an agent today and reserve the ocean adventure of a lifetime.