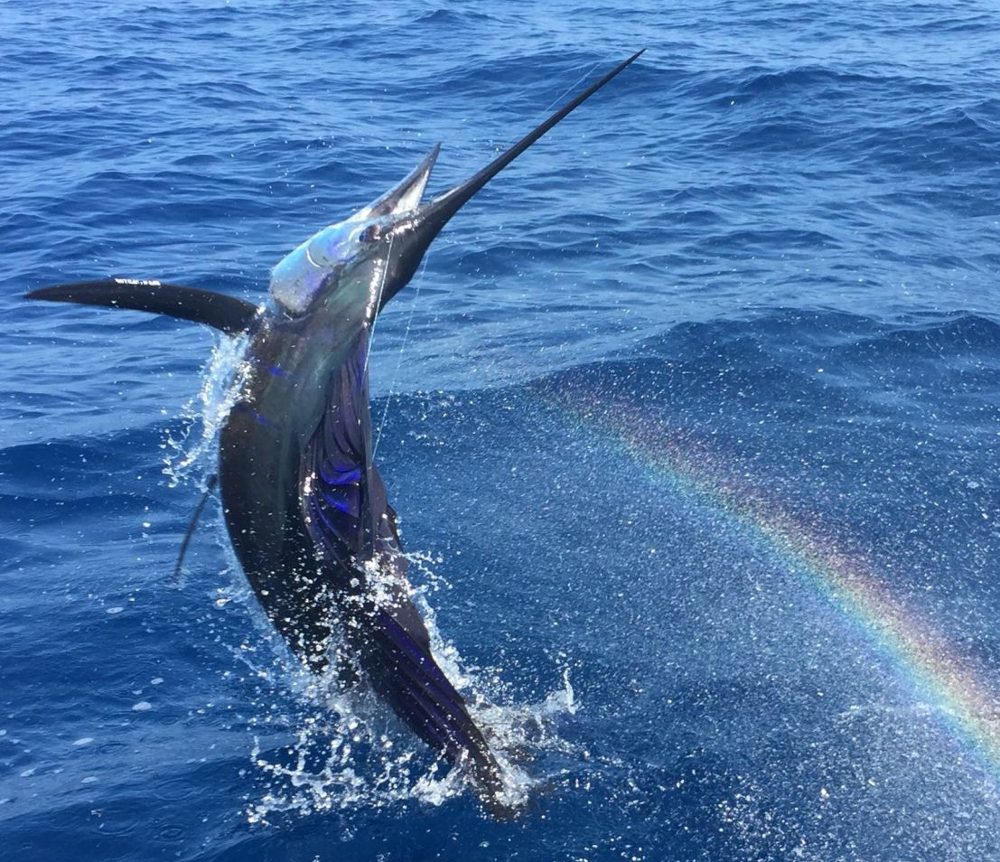 Fishing on Costa Rica’s Central Pacific Coast is always exciting, but September brings some truly thrilling opportunities to cross paths with some of the biggest fish Costa Rica has to offer. Even though September can be somewhat slower when compared to the early summer months, you still have a great shot at reeling in a big one this month if you book a fishing charter.

We’re still in the Green Season until November, after all, and that means the fishing is still hot — and much hotter than most other places in Central America. Tuna, dorado, rooster, grouper, snapper, and black, blue and striped marlin are all on the menu this month.

Here’s what you need to know about fishing in Costa Rica in September.

We’re in the first month of fall here in Los Suenos, and that means the temperatures are reasonably warm. Highs tend to go a little over 83 degrees Fahrenheit (F), while lows only dip a few degrees to around 77 F or so. But don’t let those moderate temperatures fool you — the September heat index is still averaging over 90 degrees F in Los Suenos.

The temperature story is similar in the sea. The water temperature off of Los Suenos and Jaco averages at just under 84 degrees F in September, making it pleasant for most of the fish you would want to catch in this part of the world.

In general, the wind is pretty mild in this area during September. On average, wind speeds don’t get much higher than 4.75 miles per hour this month, making this another great month for calmer water and the good fishing that comes with it.

Based on previous years, we’re likely to see a little over five inches of rain in the area as the rainy season starts to rev up. Expect it to rain in the afternoon and evening here for about 24 days of the month.

What Fish Can You Catch Near Los Suenos in September?

This is the good stuff. You can catch a lot of great fish off the Central Pacific Coast in September — both inshore and offshore. Time to dive in.

We tend to see a shift in the black marlin catch around September each year. You can find these big fish offshore in many other months, but in September, we start to see them pop up inshore. And they’re incredible.

While black marlin are relatively rare, we’re seeing them around Los Suenos this time of year, and it’s not uncommon to reel in a 500-pounder near the inshore reefs. If you hook one of these prize swimmers, expect a fight that can last for hours. Of course, the payoff is more than worth it.

As for other inshore catches in September, roosterfish and snapper are common sights, as well as jacks, mackerel, and grouper. These are all fun fish to catch, and there are plenty of each type inshore right now, but the roosterfish arguably offers the most fun. These guys are a lot smaller than black marlin — about a tenth of the size — but they put up a fight you won’t soon forget.

Farther away from the shore, there’s plenty more good fishing to be had in September. Yellowfin tuna are an offshore staple year-round, and September is no exception. Although you can catch a yellowfin tuna pretty much any day, September is special because the average size of the local tuna has just reached its peak.

The sizes are going to start a downward trajectory this month, but get in early and you might find yourself pulling in a tuna in excess of 200 pounds.

This month is also a good time to look for dorado offshore. These are great fighters, and, like tuna, they’re also great to eat.

We would be remiss if we didn’t mention the blue and striped marlin, too. September marks the beginning of a strong season for these massive fish.

Fishing in Costa Rica in September: A Can’t-Miss Experience

Ready to get in on all of this great fishing? We’re ready to take you out. Schedule your fishing charter with Adventure Tours Costa Rica now so you can get out on the water and get into some fantastic fishing.

For all of your Costa Rica travel needs, you can rely on Adventure Tours Costa Rica. To speak with our friendly and helpful team, give us a call at 1-800-761-7250 or contact us online.