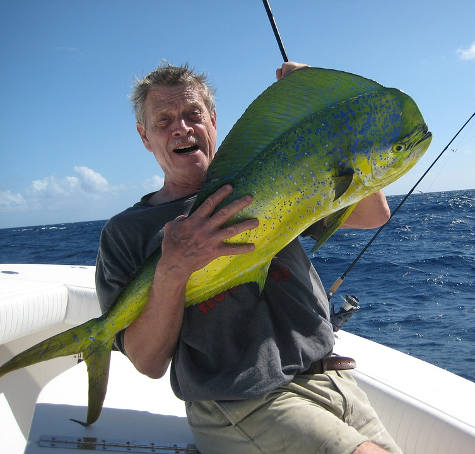 The Green Season isn’t over yet, and that means anglers still have a chance to book a fishing charter and take advantage of the calmer waters. Billfish season might have officially ended in June, but, like we do this time every year, we’re still seeing some eye-catching specimens on our charters.

While there’s still time, you don’t want to miss August fishing in Costa Rica. Why? Because yellowfin tuna season only has one more month, and blue marlin, mahi mahi, roosterfish and sailfish are biting lines like crazy.

The truth is that the fishing in Costa Rica (especially near Los Suenos) is great at all times of the year, but August is truly a special month for fishing here.

Around Los Suenos and Jaco, visitors will find moderately high temperatures as the summer months wrap up in August. With average temperatures around 77.5 degrees Fahrenheit and highs around 83.8 degrees F, August will feel a lot like July in Costa Rica — warm, rainy weather and all.

Speaking of rain, this is the last month before the real rainy season begins. While we’re technically right in the middle of the rainy season, locals know the first few months of the season are the easy part. Average monthly rainfall in the San Jose area for August hovers between 4.7 and 5.8 inches, with much rainier months to follow.

The water near Jaco and Los Suenos is fairly calm in August, with average wind speeds on the water getting just a little higher than five miles per hour. And as all experienced fishermen know, those kinds of calm waters bring some great fishing.

Fish to Look for in Costa Rica in August

It’s clear that August is the favorite month for several kinds of fish you’ll find near Jaco and Los Suenos. Let’s take a look.

August is a solid month for roosterfish, and if you’re after these, the time is now. That’s because the roosterfish catch tends to slow down after August.

All the debris in the water from heavy rains is providing some nice cover for several popular fish inshore. You won’t have to look far for some mackerel enjoying the cover, and you’re likely to cross paths with some jacks and bonitos while you’re at it.

As the rainy season ramps up, dorado (mahi mahi) start showing up in droves. Smaller mahi mahi and even yellowfin tuna in the water are almost a sure sign that there are also some marlin around — marlin love these tasty specimens, so you’ve got a shot at both predator and prey. You probably won’t see any black marlin this time of year, but the striped and blue marlin are ready to give even the most experienced anglers a fight to remember.

Mahi mahi, wahoo, and yellowfin tuna also venture into offshore waters to do some hunting in August, so marlin aren’t the only swimmers to make an appearance on your line.

August: One of the Best Fishing Months in Costa Rica

It’s not every day that you get a chance to fish in a spot that’s known around the world for some of the best fishing. And August is the perfect time of year to schedule a fishing charter and get out and explore the water near Puntarenas province.

It’s also not every day that you get to do some great fishing in a place that has so much more than fishing to offer. Who doesn’t want to spend the day fishing and the night at a world-class resort? Los Suenos and Jaco offer the best of both worlds — unbeatable fishing and unrivaled relaxation.

Adventure Tours Costa Rica is your ticket to a stress-free and perfect trip to Costa Rica. Contact us online or call 1-800-761-7250 to start planning your trip today.