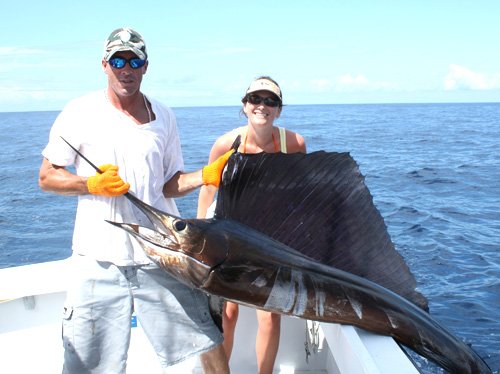 If you live in the northern half of the United States, you’re well aware of the chilly fall weather that has been setting in fast over the past month. The month of November promises even lower temperatures and the start of the holiday season.

But is that all it promises?

If you’re an angler in Costa Rica, you know that November heralds one of the best months for fishing, with marlin a-plenty. It’s not just one type of marlin, either - November promises an abundance of black marlin, blue marlin, and striped marlin alike. Some anglers see up to 70 or 80 marlin a day out of Los Sueños.

Seasoned anglers also know that Costa Rica has some beautiful weather in November which is the last month of the rainy season. However, skies will start clearing up this month after the notoriously rainy October so that you can enjoy light rains during the early afternoon.

The Lowdown on Marlin

Marlin are a part of the billfish family whose signature feature is a lance-like bill that’s used to catch prey. If you’re a rookie angler looking to land a lunker, you’ll want to make sure you have an experienced captain taking you out for your first few times. Why? Marlin can reach an impressive size of 1,500 pounds and 15 feet in length. Therefore, the bigger ones are very likely to give newbies a hard time.

Marlin are also pelagic fish which means they’re fish that typically live in waters below the continental shelf, or waters deeper than 500 feet along edges or drop-offs. To get them biting, you’ll need to use live bait like mahi, amberjack, squid, tuna, and sometimes even smaller marlin. Bait your outrigger, cast your downrigger, and wait patiently--the bite that’s coming will turn into a pretty animated fight.

After you get one on the line, it’ll start running almost instantly. The closer the fish gets to the surface, the more it’ll start thrashing and bucking on the hook - a thrilling fight for rookies and veteran anglers alike. The catch of any billfish, and especially the revered marlin is a ‘Bucket List’ achievement like no other. Before you release your prize marlin back into the ocean, don’t forget to snap a couple great trophy photos for the wall back home.

A final word on marlin: your chances of landing a Grand Slam go up dramatically in November. For those not in the know, a Grand Slam is when you land a blue marlin, black marlin, and striped marlin in the same trip. Some are lucky enough to do it all on the first day while others may not grab one on their whole trip. If you’re looking for a leg up, be sure to look over our list of veteran captained and mated fishing charters.

If offshore isn’t your thing, you’ll be happy to know that there are plenty of great inshore opportunities this time of year too. Here you’ll find a much wider variety of fish like amberjack, snapper, roosterfish, and grouper. Roosterfish especially are in abundance and they’re also pretty fun to catch. Not only do they swim close to the shore and take light bait - such as smaller jackfish or ladyfish--but they also like to put on an elaborate show as you’re reeling them in.

No matter where you head to fish in Costa Rica, you’ll likely be in for some pretty plentiful catches. Just be sure to keep plenty of live bait and towels handy as there’s bound to be some serious splashing.