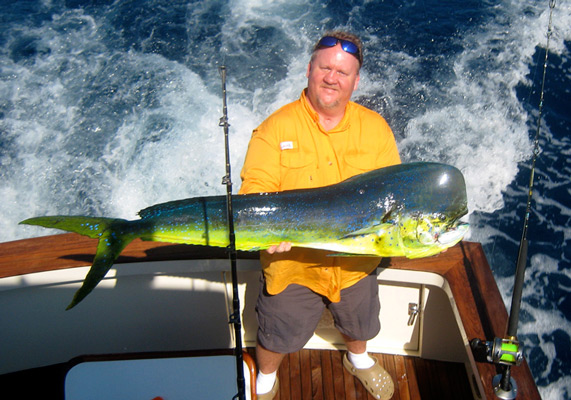 The new year is approaching, so you know what that means: Costa Rica’s peak travel season is well underway. Dry, warm weather are ideal conditions for just about any type of activity, be it catching rays or some roosterfish. Since January is one of the best months to hit Costa Rica for sportfishing in particular, let’s talk about the different species you’ll be likely to find at this time.

January is when we’ll start to see yellowfin tuna in droves, which will populate the waters of Los Suenos well into June and July. This especially tasty offshore species ranges vastly in size; the little ones clocking in at a foot and the big ones packing a wallop at 300 lbs. But their taste isn’t the only thing going for them--they also put up a heck of a fight. Because they have a higher muscle density compared to other fish, you’ll get a great show while trying to land one.

Sailfish season is at its peak in January, which runs from December to March. Sailfish get their name for the fact that they tend to spend more time leaping through the air rather than swimming in the water. Another offshore species teeming in Los Suenos, sailfish have put Costa Rica on the map in the sportfishing world. Competitors at the Annual World Billfish Series Championships and Los Suenos Signature Billfish Series often land this dazzling fish during tournaments, where sailfish comprise 98 percent of the fish caught.

Here’s another species who you’ll see a lot of inshore during January. Even though roosterfish are available all year, their highest density is between November and March. Don’t let this gorgeous species’ fanning dorsal fin and bright colors fool you, though; this aggressive predator makes for an enthralling catch. They’re usually found on sandy ocean floors in medium depths or right along the surf, so look for them in depths between 50 and 60 feet. You have a pretty good chance of landing a lunker, too--Costa Rica is on the fast track to claim the world record for the biggest roosterfish on record, a title currently held by Baja, Mexico, where a 114 lb. behemoth was found.

Different marlin sub-species can be found year-round, like the striped marlin, but others only pop up during different times of the year, like the black marlin in late spring and the blue marlin in the early months of the year. Anglers all over the world are often in search of marlin, which frequently hit 600 lbs. or higher. They’re also a powerful and persistent species, making them a particularly fun catch. You can find most sub-species offshore in Los Suenos, Drake Bay, the Golfito area, and all along the Northern Pacific Coast.

With this information in mind, we hope you land the catch of your dreams in the coming year. As always, thanks for reading, and have a safe, happy, and healthy New Year!