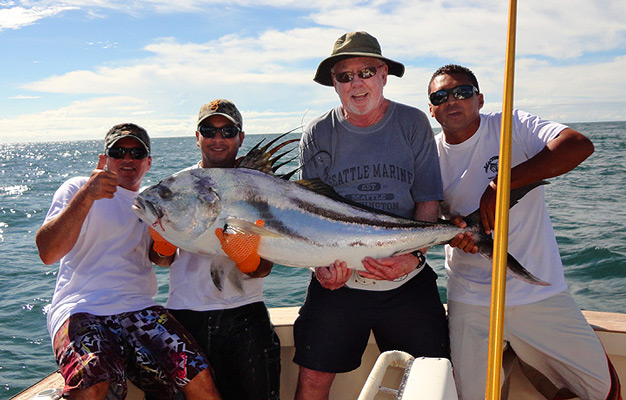 With the new year in full swing, the time to hit Costa Rica for some of the best sportfishing is now. February is the peak of the dry season, so you’ll get to enjoy beautiful, sunny weather without the sticky humidity that defines the wet season. Today we’ll take a look at some of the most common fish species you’re likely to land in Costa Rica throughout the month of February.

February is one of the last months you’ll be able to catch sailfish in droves down here. This offshore species is most abundant in Costa Rican waters between December and March, with Los Suenos in particular as a hotspot. This fish’s name comes from its sailing-like dorsal fin, and the fact that you can often see them leaping out of the water into the air. While not as feisty as other species, like marlin and roosterfish, they still put up a fight worth watching.

However, there’s more to sailfish than its signature airtime and brilliant blue fin--they’ve put this Central Pacific country on the map in the sportfishing world thanks to the Annual World Billfish Series Championships and Los Suenos Signature Billfish Series.

While most people first encounter this tasty offshore species at sushi restaurants, seasoned anglers know that Los Suenos’ waters are teeming with them from January to July. Fortunately, there’s no off season for this fish, so you’re more than likely to land a few outside of this time window, too.

Yellowfin tuna are some of the biggest and most powerful fish you’ll find out here, with some lunkers tipping the scale just over 300 lbs.! Powered by a single muscle, yellowfin tuna give anglers some of the best shows ever, if for no other reason than their sheer strength.

Whether you’re a novice or an experienced angler, roosterfish can be a fun and exciting catch. Most roosterfish range between 20 to 50 lbs., but some of the bigger ones can top out at 100 lbs. This inshore species can be found skittering along the surf and sandy ocean floors in depths of 50 to 60 feet.

Like yellowfin tuna, they’re available all year round, but they’re peak density is between November and March; this means February is one of the last months you’ll have to land roosterfish in abundance down in Los Suenos.

Last but not least, marlin and many of their sub-species are never in short supply around Costa Rica. Most sub-species are commonly found in Los Suenos, Golfito, and Drakes Bay, but not all of them are so frequently available throughout the year. Striped marlin can be caught year round, while black marlin is the densest in April and May.

Blue marlin, on the other hand, pop up most frequently between December and April. Like black marlin, they can easily weigh over 600 lbs., making them some of the most prized catches of any type of fish. Anglers love them for their strength and tenacity, both of which make for a truly thrilling catch.

Whatever species is on your bucket list, be sure to book one of the best charters available in Costa Rica from our list of preferred boats out of the Los Suenos Marina.