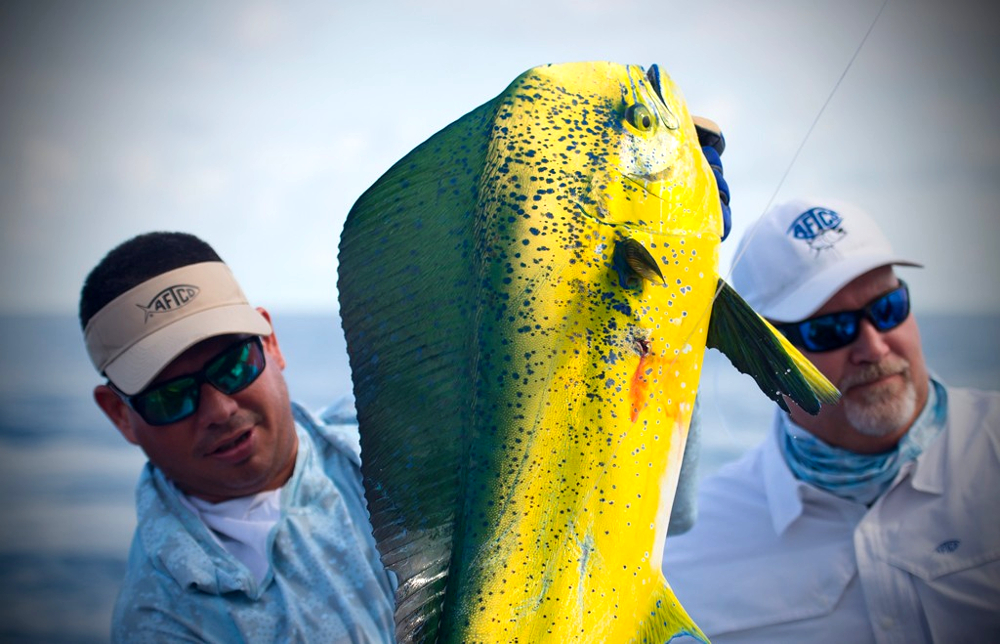 March fishing in Los Suenos: get it while the getting is good! Yes - the fishing is always good in Costa Rica, but with the rainy season coming in May and the vast majority of game fish biting in droves, March is one of the best times to get that inshore or offshore adventure in before things get wet.

The fish may already be wet, but you don’t have to be.

The weather is looking seasonably good for the height of the dry season, with the new moon on the 13th cycling to a full moon on the 28th, making for prime fishing the whole second half of the month.

Whether you are out at sea to battle the big billfish and game or looking to land some snapper and roosterfish inshore, we’ve got the information you’re going to need to make the most of your fishing escape.

How could we talk about inshore fishing in Costa Rica without immediately bringing up the roosterfish? You’ll want to find yourself a guide who knows the inshore spots. There’s going to be lots of action inshore, and using live bait around the rocky points or the reefs should yield some big roosterfish or snapper.
Make sure you’re ready to reel if you see that rooster’s comb; they love to charge the boat for slack and are great at unhooking themselves. Another well-known battler – the bottom-dwelling Groupers can also be found in rocky areas of the deeper inshore waters or hiding out along the ocean shelf.

Head in near the river mouths and comb the shallows for Tarpon. Fishing for this inshore monster is terrific in March.

While the real story for March lies in the deepwater offshore, there is still no shortage of trophy fish to be caught near closer to land.

The big billfish game is still in its peak season off the west side of Costa Rica. Those big sailfish keep on biting, with 10 – 12 releases being reported in a day last month. The wolves of the sea never hunt alone, so if there’s one to be caught, there are lots more nearby. The billfish have remained in the well-known hotspots, hemmed in by upwelling caused by the California and Humboldt currents meeting and taking refuge from the trade winds that funnel between the mountains in the East.

You can fish the sailfish and marlin year-round on this side of Costa Rica, but the peak season is world-class. So much that the Offshore World Championship Sportfishing Tournament will be down here next month in April, wrapping up the season.

You’ll generally find your sailfish down about 100-300 feet and not as far out as the marlin. Head out a little further to find black, blue, and striped marlin. Mackerel, jacks, or Mahi make good bait for the big fish feeding near the surface.

It’s best to use the local baitfish when you come down if you want to find yourself in a showdown with one of these fish. Those billfish certainly aren’t the only fighters off the shores of Los Suenos, though.

If it’s a battle you’re after, you can still tangle with some Wahoo. You can always tell when a Wahoo has hooked your line because he’s trying to take all of it. Novice anglers need not apply.

You’ll still be sure to catch plenty of Dorado (mahi-mahi) and some delicious yellowfin tuna if releasing those sailfish all day gets you hungry.
Whether you’re an experienced angler, looking to track down that bucket list trophy catch, or a novice looking for an experience you’ll never forget, the fish are waiting for you down here in Costa Rica.

Make sure when you are planning your trip that you trust your expedition to the professionals. A good captain and guide will make sure you enjoy all that the lush coastline has to offer. As they say down here: Pura Vida, it’s what Costa Rica is all about; come and enjoy it.