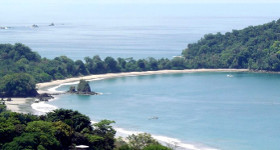 From sanctuaries such as Manuel Antonio near Los Suenos, Costa Rica to the misty Monteverde Cloud Forest, the lush Central American country is home to a host of magnificent national parks.


Manuel Antonio National Park is one of Costa Rica’s best-known nature reserves for a few good reasons. Though small compared to others, the sanctuary packs in a variety of stunning landscapes. Within minutes you can go from walking dense jungle trails to white-sand beaches before shimmering turquoise waters. View multitudes of monkeys along hilly paths before discovering a scenic cove for amazing snorkeling among stunning coral reefs.


If you want to see a wide variety of wildlife in a concentrated area, Carara National Park is the place to go. Sitting astride a transition zone from tropical dry forest to rainforest, the retreat is home to flora and fauna from both unique habitats. That includes the country’s largest population of scarlet macaws! While the colorful birds put on spectacular shows in the lush canopy, creatures on the ground are also a big draw. Carara is where you’ll find the famed Tarcoles River Crocodile Bridge, a spectacular and safe spot to view massive crocodiles basking on the riverbanks below.


As you can probably guess from its name, Monteverde offers the chance to walk among misty mountain trails that seem lifted right out of a dream landscape. Passing monkeys, tropical birds and foliage that exists nowhere else in the world, walk through a moss-covered wonderland where tangles of vines fall from the treetops. Be sure to snap a selfie on its famous red hanging bridge. You can also set one foot on the Pacific side and one on the Atlantic as the sanctuary sits atop the Continental Divide.


Costa Rica’s largest park is one of its most biologically diverse. Set on the unspoiled Osa Peninsula, Corcovado Park may not the easiest to reach, but those who make it to the remote location are rewarded with pristine lowland rainforest that’s one of the last of its kind in the world. Corcovado has no roads so expect moderate to difficult hikes to see exotic wildlife such as the Harpy Eagle, Baird’s Tapir and even the occasional jaguar.

Another place that’s tough to reach, Tortuguero is only accessible by boat or plane. Hop in a canoe to paddle mangrove-lined canals that pass indigenous villages and wind through a green forest that’s home to monkeys, basilisk lizards and crocodiles. Emerge on a beautiful beach that’s world famous for the sea turtles that nest and give the park its name.


A trip to Poas lets you look into the heart of one of the world’s largest active volcano craters. Stretching over a mile, the bubbling cauldron hisses steam for a dramatic show of the earth’s geothermal power. Easy access, with a paved path leading from a parking lot, helps make this park one of Costa Rica’s most visited.


While its name may lead you to believe its main attraction is a volcano, Tenorio’s biggest draw is the Rio Celeste Waterfall. The brilliant blue cascade will have your Instagram followers think you’ve gone heavy with the photo filter but the stunning blue hue is all natural. And while Tenorio’s volcano is dormant, the underground activity causes geysers to spout water in the air and creates bubbling hot springs that beg you to enjoy a soothing soak. Add in hanging bridges through pristine rainforest and an abundance of tropical wildlife to make this a must-visit park.

Beyond zip lines, offroad adventures and beaches such as Playa Jaco, exploring national parks is one of the most amazing things to do in Costa Rica.