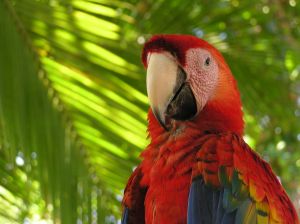 The Manuel Antonio National Park is a small national park in the Pacific coastal region of Costa Rica. It is widely considered to be one of the most breathtakingly beautiful national parks in the world, with Forbes Magazine having listed it among the 12 most beautiful national parks in the world in 2011. This isn’t a reserve that you can never enter for fear of doing damage to it, however; while the Costa Rican government works hard to maintain the health and wellbeing of its national parks, you can visit and enjoy the Manuel Antonio National Park as much as you like – and there are plenty of reasons to do so!

The landscape of the park contains several coves, a variety of white, sandy beaches fighting against the lush foliage of the rainforest, and large mountains rising not far from the beaches themselves. Furthermore, several coral reefs can be found just off the coast, keeping the coast itself healthy and strong while also providing great snorkeling and diving opportunities, as those coral reefs house some of the most bio-diverse marine life in the world!

If beach life is your idea of the good life, then the Manuel Antonio National Park is definitely the park for you. With four pristine beaches contained in the park – Manuel Antonio, Espadilla Sur, Teloro, and Playita – you have your choice of beaches. With lifeguards on duty, snorkeling in tidal pools in both Manuel Antonio and Espadilla Sur, the beach experience in the park is by far some of the best you can have in Costa Rica, and possibly the world!

The beaches aren’t all that there is to the park, however. A number of walking trails crisscross throughout the park, offering an opportunity to go on a beautiful walking tour with a personal, bilingual, government-certified naturalist guide who can show you all of the ins-and-outs of the park, while also providing information on the various wildlife you are certain to encounter, such as the park’s monkeys, coatis, sloths, exotic birds, and lizards. Why go to the zoo when you can see healthy, happy specimens of Costa Rican wildlife in their own natural habitat, living as they were meant to?

When you’ve finished with your day in the park, you don’t need to travel very far to reach “civilization”: a variety of local restaurants and craftsmen vend just outside the park, allowing you to stroll through the area picking up souvenirs and enjoying local cuisine. It’s the perfect way to end a day in what must be paradise, don’t you agree?