Time for a Fishing Tournament! 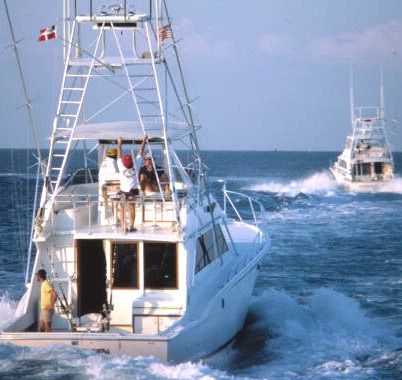 Big game fishing events don’t get much bigger than this, with Los Suenos Marina hosting the Signature Triple Crown tournament in January. The series of events, which welcomes an international gathering of serious anglers, kicks off on January 15th with the first leg running to the 18th. Then we’ll get two more exciting rounds, from February 26th to the 29th and from March 25th to the 28th.

But Fisherwomen Head Out First

While the tournament officially starts on the 15th, there’s a pre-event many wouldn’t want to miss. On Tuesday, January 14th, for just one day, a Ladies Only tournament invites some of the world’s best female anglers to head out to bring in big billfish before everyone gets a shot starting the next day. We’re expecting about 50 competing women to set off in nearly 20 boats with awards going out the following day. First, second and third-place winners will get trophies and cash prizes, while just one amazing fisherwoman will take the title of Top Female Angler Overall.

Things will be buzzing at the Los Suenos Marina in the early hours of January 15th. Historically, between forty and fifty teams head out, with about 200 or more anglers setting their sites on one of the world’s most fruitful fishing spots. If past competitions are any indications, soon after the boats set off in the morning they’ll start hooking massive catches. Last year, 89 billfish were released by ten in the morning on the first day, a mix of five marlin and 84 sails.

Over the three days, they hook numbers like more than 600 billfish, with sails making up the bulk of the releases, in the mid-500s. If last year’s numbers hold, we can expect them to hook more than 60 marlin over the three days. There’s a good reason why the world’s top anglers head to the waters of the Central Pacific at this time. While the grounds are always fertile, the run between December and April are particularly amazing for billfish.

If you’re one of the lucky 600-plus invitees to the celebratory dinner at the Los Suenos Beach Club you’ll enjoy authentic Costa Rican cuisine, live local music, and seeing the winners take the stage to accept trophies and cash prizes. But there’s more. Many of these elite anglers came from the far corners of the globe so they’re going to have a good time before heading back. Expect an amazing fireworks show over glimmering Pacific waters and an after-party with music, dancing, and revelry into the night.

The Winning Teams Move Up

The top teams that emerge from the Los Suenos Signature Triple Crown earn eligibility to square off against top-notch anglers in the 2020 Offshore World Championship. Held in Quepos, Costa Rica from April 19th to the 24th, the event kicks off with a dramatic boat parade and then some of the top anglers on the planet set off for some of the world’s most fertile fishing grounds. It culminates with a massive dock party and an awards gala at the Marina Pez Vela.

There’s just something about enjoying the “after.” The first hours after a storm, idle beaches in the days after Labor Day, the quiet of New Year’s morning when most of the world is sleeping off their celebrating. So why would you want to leave Los Suenos after the tournament ends? That seems like a perfect time to enjoy the Los Suenos Resort and Marina, strolling its uncrowded waterfront shops, getting in some tranquil pool time at the Los Suenos Marriott Ocean & Golf Resort, perhaps enjoying an unhurried round of golf on an 18-hole championship course. So sure, a world-class fishing tournament is exciting, the event of a lifetime for some, but maybe hang around and enjoy the serenity of paradise for just a while after the big event passes.

So if you’re serious about a fishing trip out of Los Suenos, or just want to enjoy the tropical paradise on land, January, February, and March are amazing months to plan your trip to Costa Rica.