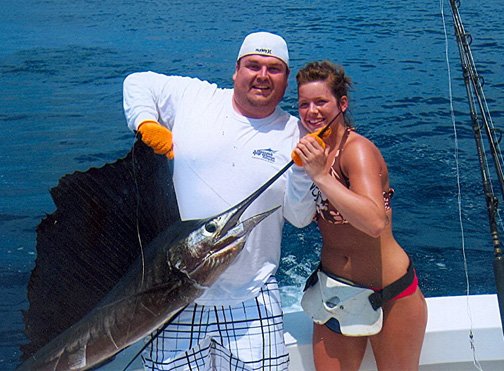 Los Suenos fishing in August and early September provided some fun here in the Central Pacific of Costa Rica. The offshore fishing from Los Suenos has offered a steady sailfish bite, as well as an occasional marlin bite.

Most Los Suenos charters have been catching 2-6 sailfish a day on average throughout the month, with a few scattered days of exceptional action getting over 15 bites a day. Experience says that the bite around Los Suenos should remain steady through the month of September.

Yellow fin tuna fishing has been showing pretty steady offshore - provided you find the spinner dolphins and birds that feed with them. Most yellow fins caught offshore from Los Suenos are between 40-80 lbs, but the bigger ones I have landed have been over 150 lbs this month.

The Costa Rica tuna fishing really tests an anglers endurance - pound for pound they are one of the toughest fighting fish in the sea.

My personal favorite way to catch yellow fin is tossing live bait in front of them off the back of the boat while casting poppers on spin rods off the bow. These yellow fin tunas are great eating, take some to a local sushi bar to show off your Costa Rica fishing prize as well as experience the freshest sushi ever!

Just in the past week, there have been good numbers of large Mahi-Mahi (Dorado) showing up. The Dorado should be increasing in number and consistency over the next couple months. These colorful, energetic and acrobatic fish provide excellent meat for dinner!

The Dorado can also be targeted a little closer to the charter dock than the billfish and tunas. Through December they should be abundant as close as 8miles offshore from the Los Suenos marina which makes for a great half-day charter fishing. The Dorado is normally found around current lines and debris floating out of the gulf of Nicoya.

Inshore fishing from Los Suenos has been great and will continue to be through September and in to October. The rooster fish action has been very good and consistent across the Gulf of Nicoya, most notably around Tambor, Tortuga Island, and Las Islas Negritas. Most roosters are averaging about 30lbs, but catching one over 80 lbs is not uncommon.

In this same area several other species have been showing up in good numbers as well: Jacks, Mackerels, Hound Fish, Snappers, and even occasional Mahi Mahi have been caught while fishing for roosters in this area.

To the south of Los Suenos on the reefs offshore from Jaco, Hermosa, and Esterillos big Snappers, big Amberjacks, small Wahoos and small Yellow Fin in the 5-25 lb range have been plentiful and should continue to be through November. Live baiting, jigging and casting poppers provide lots of action all day.