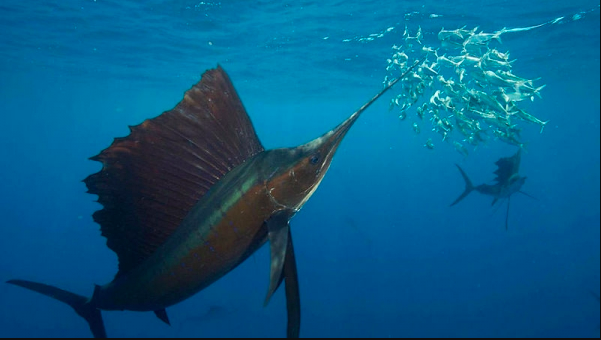 Fishing trips out of Los Suenos Marina have been enjoying prime sailfish time offshore, plus targeting table fish and prized black marlin along the inshore reefs.

We just wrapped up the second leg of the annual Signature Triple Crown Billfish tournament. Nearly 200 anglers went out on more than 30 boats for three days of some of the best sportfishing anywhere in the world. With the billfish numbers in the 500 range, we’re looking at about 15 per boat over the unbelievable three-day run. The fishermen, and fisherwomen, just wrapped things up with an awards ceremony, and one heck of party at the marina. Now, most of the serious anglers will be leaving us. But just for a bit. The third and final leg of the tournament kicks off on March 25th for another three days of sensational billfish action.

But for the rest of us, every day is wide open for tournament-level action in these fertile waters. At least until the end of April, when things usually go from incredible to just really good in terms of sailfish. Even on the slow days, we’ve been seeing numbers like 15 bites. And as for releases, even on days when the action isn’t the greatest, we’re still getting about ten sailfish. But most days are much better than that, as we’re looking at around 15 to 20 releases on average, and the bites running from about 20 to 50 each day.

While, yes, top fishermen from across the globe are heading offshore to some of the best fishing grounds on the planet, we’re not forgetting about the inshore action that never fails to deliver. And this is a great time to target the rocky reefs all along our shores. February and March are traditionally great times for amberjacks, cubera snappers and roosters. The past month was particularly good for roosterfish, which are great feisty catches that most anglers, especially the younger ones, love to hook.

But, of course, roosters are not for everyone in terms of table fish to suit all tastebuds. So when we’re looking for table fare we’ve been going for groupers with some bottom fishing anywhere from 3 to 5 feet. While the groupers we’re finding these days aren’t always the biggest, averaging around ten pounds and a little under, we’re making up for it in volume and bringing lots of them at a time to add up to big overall hauls of table fish.

Another huge plus of inshore fishing is black marlin. Sure, they’re elusive, and peak season can be a little unpredictable. But we’ve been having some luck with live baiting along the inshore shallows. Averaging around 400 pounds, but often even bigger, black marlin are at the tippy top of most anglers' wish lists and put up the most amazing acrobatic shows when hooked. Right now is a pretty good time to go after them, as we’re heading up into prime season with the traditional black-marlin peak we usually see in May and June.

Dorado on the Slight Downswing

February saw some pretty good numbers of dorado, but fewer than in January and so it seems that they’ll follow the usual pattern of tapering off at this time of year. While we can find them year-round, peak density time is traditionally in the Green Season from May to November. So we’re expecting a lull over the next two months or so until their numbers start to rise again. That said, if you want to go after this tasty table fish, we’ll find them, most often in schools and usually in the 20 to 30-pound range.

Yellowfins on the Rise

Another fish that makes an amazing meal that you can also find at any time of the year, we’re awaiting tuna time to ramp up. Things have been moderate lately. The tuna are consistent and around if we’re going for them, usually about 20 miles out and beyond. Most have been 30 to 50-pounders, going after them with artificial lures, and live baiting brings in the bigger ones, more or less in the 50 to 150-pound range lately. If the past seasons are any indications, and they usually are, March will be the last of the low-density months and we’ll see an influx starting in April until the real prime tuna time hits in late summer.

So why not contact an agent and book a fishing charter out of Los Suenos and see for yourself why the world’s top anglers have been heading out in our waters?