A Marvelous Time for Marlin! 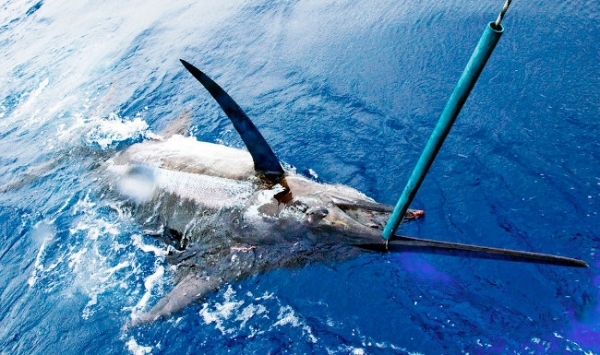 While we've seen nice numbers of yellowfins and mahi-mahi of late, fishing trips out of Los Suenos Marina have been going for the prizes of big blue and black marlin.

January is kind of a big deal in these parts, as the planet’s top anglers head to the waters of the Central Pacific for world-class sportfishing competitions. They only come because big catches are plentiful, and that’s what we’ve been seeing in the run-up to tournament time. The weather is also a factor. We’re enjoying the first months of the dry season that stretches with big, bright clear skies into April, and so we’ve had a lot of glorious days out on the water.


Pretty much every day we’ve been bringing in mahi-mahi. Big mahi-mahi. We’re often talking in the 50 to 60-pound range, though medium-sized fish that come anywhere from 15 to 40 pounds are more common. Both inshore and while out trolling offshore we’ve been hauling them in pretty regularly. We can thank the last days of the Green Season for some of that bounty closer to shore, as up until even recently there’s still some floating debris left over from the rainy season, and the mahi-mahi love to lurk under flotsam.

We’ll see less flotsam the farther the calendar moves away from the rainy days. And if the past years are any kind of indication, we’ll start to see mahi-mahi drop off somewhat as the water warms up and the sailfish season goes into full swing. Then, usually, how the cycle goes, we’ll start to see mahi-mahi density pick up again when they arrive in bigger numbers in late August and early September.


As most experienced fishermen know, how one kind of fish behaves affects others. So the mahi-mahi offshore mean there has been plenty of big blue marlin heading out to feed on them. And we’ve been right there to hook the marlin at their feeding grounds. As we don’t see much-floating debris far out in open water, we’ve been trolling with live bait for marlin, and coming up with a few every day, sometimes up to five, but three is really the average. As for size, most of the blue marlin we’re seeing range anywhere from 150 to 250 pounds, with some bigger and smaller, but that’s been about the norm. An exciting catch that’s the thrill of a lifetime for many, hooking one of these magnificent fighters on shouldn’t be missed.

Going After Black and Striped Marlin

When serious anglers head to Los Suenos, most have one thing in the backs of their minds -- black marlin. It’s the top bucket-list check-off and quite possibly the most thrilling catch you’ll see in your lifetime. While it’s not as easy as hooking mahi-mahi, with some patience live baiting we’re hooking them regularly, about one to three bites per outing when that’s our focus. While offshore has been hit-and-miss for black marlin, trolling the inshore reefs has been seeing most of the action. That’s where the big ones of late, often ranging from 300 to 500 pounds, have been found, putting on amazing aerial displays with powerful leaps when hooked. While blacks are around all year, now is a particularly good time to go after them.

It’s also a pretty good time of the year right now for striped marlin. True, they don’t have the size and power of the black marlin, usually coming in at around 100 to 150 pounds. But there have been a few 200 pounders in the mix recently. As they’re not as big as black, stripeys put on even more spectacular shows when hooked, jumping high with acrobatic grace. And we’re seeing them in bigger numbers than black marlin, with high-density time usually running from the middle of December until well into February.

What’s Up With Tuna?


Yeah, we almost always include yellowfins in our reports, because we can always go after them. We see pods of spinner dolphins; we bring in tuna, as simple as that. It does require watching for birds, and chasing the pods takes time and you usually end up covering some serious water, but once you get to them it’s nice hauls almost guaranteed. For the bigger ones, live baiting, we’ll land them in the 80 to 100-pound range. More common in recent days, we’re seeing them in the medium 30 to 50-pound range. So if you want to invest in the distance, targeting tuna almost guarantees you’ll end the day with a big box full of fine table fish.


While boats are often more focused going offshore at this time of year, peak inshore season is just about upon us. January and February are a great time to go along the inshore reefs. While most of the year roosterfish are usually hooked in the 10 to 20-pound range, we’ll start to see bigger ones up to 80 pounds. Roosters are especially fun for younger anglers as they’re serious fighters when hooked, but their smaller size (compared to marlin) means that even newbies can handle them. With their iconic spines that stick straight up, they also make for awesome photos on the boat.

But inshore isn’t all about roosters. We’ve been going for groupers by deep dropping at around 200 to 400 feet. Jacks and snappers have been in the mix, and, even though we’re not going after them, you can usually count on some mahi-mahi to show up inshore and add to the bounty of the table fish you’re bringing home.

Fishing charters out of Los Suenos fill up fast, especially these days, so contact an agent now for the big game fishing adventure of a lifetime.