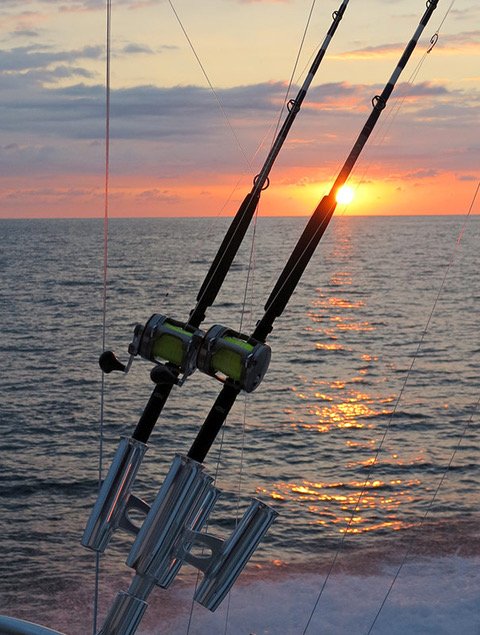 April brought the annual Lucas Oil Offshore World Championship back to Costa Rica. 256 anglers from 29 countries competed as 50 teams for the most exclusive title in international fishing. The 38 foot custom fishing charter earned top prize in their category for assisting with the release of an amazing number of billfish resulting in 2700 points.

We saw tremendous populations of Marlin. The championship tournament video-verified more blue marlin in four days than had been seen in the previous four tournaments! May through July is a wonderful time for blue and black marlin in our calm Costa Rican waters. Adventurous anglers will find them fairly common off shore, providing a good opportunity for these magnificent and strong creatures to be landed. As veterans know, the Marlin is considered to be the ‘holy grail’ among sports fishermen and among the fastest fish in the ocean.

While your imagination is caught in a tug of war with the Marlin, let it drift to ‘ahi or Yellowfin tuna. The schools of Yellowfin, commonly found among pods of playful porpoise, continue to be as good as we have seen the last couple years. With a strong captain and well-weathered crew, finicky bait preferences will not be an issue for the capture of Yellowfin. Our forecasters expect the Yellowfin to remain plentiful over the next several months, slowly tapering off beginning in July.

At this time of year the Dorado (Mahi Mahi) are scarce unless you come across drift wood offshore that may be hiding a few. The best season for Mahi Mahi is still approaching, so if your interest lies in landing one of these dazzling and strong fighting fish, be sure to book with our seasoned and knowledgeable team for this autumn - ideally in October through December.

We are sad to report current Sailfish numbers are lower than normal for May. That being said, we still get 1 to 5 bites on the line per day! While we do expect this trend to remain, the well-known fact that this apex predator doesn’t tire easily makes the achievement all the more glorious should a dedicated deep sea angler land the iconic billfish.

Our mesmerizing inshore reefs attract the Wahoo and Rooster fish as they prefer to nestle among rocky points and coral. We expect a continual rise in numbers through June and July. Both fish are equally exciting to catch and delicious for dinner. The Costa Rica Green season is the very best time to enjoy them.

Drop your line down 300-500 ft deep to snatch a Grouper or try your skills at the Snapper. The Snapper are as numerous as can be in our clear blue ocean. These two species of tasty fish are showing our experienced crews a lot of action this season. Be sure to check them off your bucket list by contacting Los Sueños Sportfishing Charter your day long off shore fishing trip today!