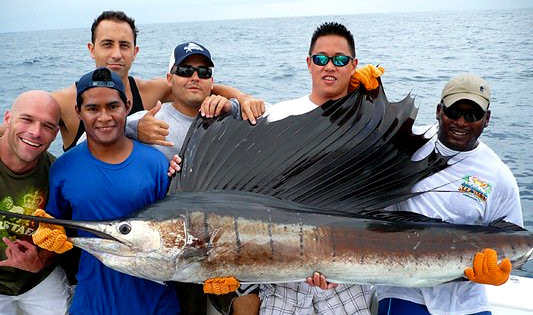 Make your plan to set off from Los Suenos Marina, where calm waters under clear skies create conditions that are perfect for both inshore and offshore fishing. As we approach the end of a magnificent high season, we're seeing a splendid showing of sailfish offshore with up to a dozen daily hookups. Warm ocean temperatures have attracted the sought-after billfish in large numbers, which will likely taper off somewhat in May.

Plentiful at any time of the year, striped marlin in the 150 to 400-pound range have also been making a nice appearance. Given to tailing on the surface, these majestic creatures bite at a broad assortment of bait and put on a stunning display as they hurl through the air while on the line. We're also seeing regular catches of blue marlin in the 80 to 120-pound range, and 400 pounders have frequented our waters.

The Central Pacific's star attraction will be abundant soon! With the green season approaching, it's an optimal time to target one of the saltwater angler's greatest prizes - the black marlin. Seen in larger numbers along the inshore reefs of Herradura Bay from April to July, the famed gamefish beckons you to embark on an unforgettable fishing excursion. We're now getting multiple shots at marlin offshore, and along the inshore reefs by pulling live bait that also hooks other sailfish.

Why go after the prized black marlin? To pit your skills against the formidable strength and boundless tenacity of these magnificent fish that mount sensational shows of aerial acrobatics in the battle between angler and catch. One of the fastest fishes in the world, black marlin in the 300 to 500-pound range roam our waters.

Always a Good Time for Tuna

A delectable fish that's prevalent no matter the month, large yellowfin tuna have been plentiful of late. While they often prefer deep water, we're spotting yellowfin in the 50 to 200-pound range as they travel with pods of dolphins less than 20 miles offshore. Admire the fierce fight that these fish put up as they make deep plunges once they're hooked. Inshore, we're using rubber squid lures and cedar plugs to catch them in the ten to 50-pound range. Considered one of the tastiest treats of the sea, yellowfin tuna is perfect for a fresh-caught dinner after an inspiring day out on the ocean.

Deep dropping in the 300 to 600-foot range has been bringing in grey tilefish and snowy grouper, another fish that makes for a wonderful meal. Dropping bonito bait along the inshore reefs has resulted in a bounty of mullets, snappers and jacks.

With its distinct dorsal fin that fans with excitement as it hunts for baitfish, the iconic roosterfish is always a great catch. Baiting with sardines, we're getting good numbers of smaller roosterfish inshore just beyond the breakers. Hunts for trophy roosterfish take us to the waters around the Negritos Islands where 50 to 80-pounders have been biting.

Charters head out just once a day. Demand is high, space is limited and slots often sell out months in advance - so don't let the adventure trip you've been dreaming of slip away. Contact one of our agents to lock in some big game fishing and ensure that your Costa Rica vacation is all the more memorable.