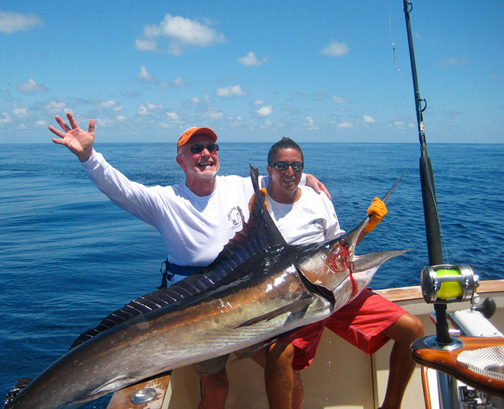 Both inshore and offshore Los Suenos Costa Rica sportfishing has been incredibly good for a couple of months now, and we expect that it will only get better as our prime fishing season continues. Unparalleled numbers of Mahi Mahi, (Dorado), have brought us the highest catch rates we’ve seen in several years. Spectacularly colored, wickedly fast and incredibly tasty, Mahi Mahi have been the star of the show in the Pacific out of Los Suenos since late October with no signs of slowing down. We have been catching Mahi Mahi in the 15-40-pound range both inshore and offshore, with no less than 4 and as many as 10 sightings daily simply trolling for Billfish in the open Pacific.

And speaking of Billfish – January through September is prime Billfish season for Los Suenos offshore sportfishing! The Marlin have been growing in density since late November and numbers are abundant. Prime months for Marlin are typically January to April, and offshore, we are spotting a decent showing of Striped Marlin in the 80-150-pound range, as well as a fantastic showing of Blue Marlin, which are coming in at the 130-250-pound range.

Black Marlin are also making a show in our calm Pacific waters out of Los Suenos Costa Rica. The ultimate bucket list gamefish for salt-water anglers the world over, Black Marlin are the rarest of their species, and also the largest. Out of Los Suenos, we typically see Black Marlin in the 350-500-pound range, though they often come in even larger. The Black Marlin’s huge aerial jumps make for a thrilling catch. Typically seen inshore, we are also seeing Black Marlin offshore as well and have been averaging anywhere from 1-3 bites daily on serious hunts with seasoned anglers who are focused on catching and releasing these highly sought-after and elusive fish.

Every month of the year is perfect for catching Yellowfin Tuna out of Los Suenos, and the past few months have been excellent as always. We use spinner dolphin pods to spot Yellowfin, as they are almost always in a holding pattern around the pods. In addition, radar and communicating on our VHF help to narrow the search, as does watching the sea birds on the horizon. Once a chase has been successful, we typically catch Yellowfin in the 20-60-pound range using anything from live bait to jigging with cedar plugs and bullet lures.

Inshore Los Suenos sportfishing has been great this season as well, with Alma Jack, Groupers, Snappers, smaller Yellowfin, and of course, Roosterfish. Another major “bucket-list” catch, ornate Roosters with their elaborate fanning dorsal fins are ranging in the 50-80-pound size, and February is one of the best months for catching Roosters in the bigger sizes.

Sportfishing out of Los Suenos Costa Rica is in high demand and spaces are limited as each boat goes out only once per day. If you want your vacation in Costa Rica to include a day or two of world-class sportfishing, you must not delay. We typically sell out of spaces many months in advance, so try to get your charter reserved as soon as possible. Contact one of our agents and don’t miss out on the fishing trip of a lifetime!