Gallo Pinto - The History and a Recipe 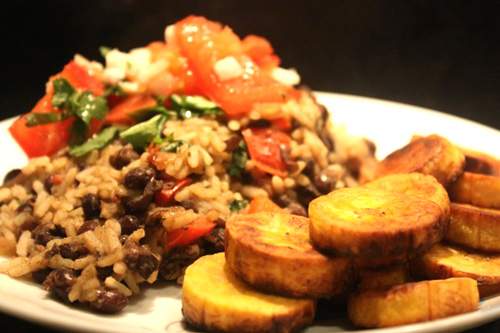 While most people have never heard of Gallo Pinto before their travels to Central America, this dish is a source of national pride in Costa Rica. Indeed, every household and restaurant in Costa Rica claims to have the best Gallo Pinto! You will find this dish being served everywhere from the typical Costa Rican quick-service restaurants, (Nationally called, “Sodas”), to even the highest-end of restaurants.

So what is Gallo Pinto and where did it come from?

Gallo Pinto is a traditional dish consisting of white rice and black beans, which is often served at breakfast or dinner in Costa Rica, however it is not uncommon to find it being served at every meal. Deceptive in its simplicity, this delicious dish is one of the most loved foods by tourists and Costa Ricans alike.

The exact origins of Gallo Pinto are hotly debated in Central America, and have sparked an unparalleled rivalry between Costa Rica and Nicaragua, with both countries claiming that the dish originated on its soil.

Nicaraguans claim that a rudimentary version of the dish was brought to Nicaragua by African-Latinos, who arrived on the Caribbean coast of Nicaragua during the 17th and 18th centuries. In their traditional recipe, white rice is combined with red beans.

Costa Ricans, however, dispute this claim, citing a more recent history. According to the legend, Gallo Pinto was created in the San Jose neighborhood of San Sabastian in 1930. According to the story, a small farm owner spent several months fattening up a spotted rooster for a dinner party he was having. On the day of the party, he found that news of the event had spread throughout the neighborhood, and that the number of guests who showed up far exceeded the yield from a single poultry bird.

Thinking quickly, the Latino-Jamaican kitchen staff devised a plan to mix a large batch of rice and black beans together in order to provide enough food for the large gathering. As the evening wore on, more of the guests were served the rice and bean mixture than those who received chicken. The guest who were not able to get a serving of chicken subsequently joked with one another, calling the rice and beans, “Gallo Pinto”, which in Spanish, means “spotted rooster”.


Fun Fact: Costa Rica created the world’s largest batch of Gallo Pinto in 2009, which contained 2,640 lbs. of beans and 3,300 lbs of rice. The batch, prepared at the Hotel Ramada Plaza Herradura, fed a astonishing 50,000 people!


Once you’ve experienced Gallo Pinto for yourself, we just know you’ll want to take the recipe home with you.

On the day before:

On the day of: