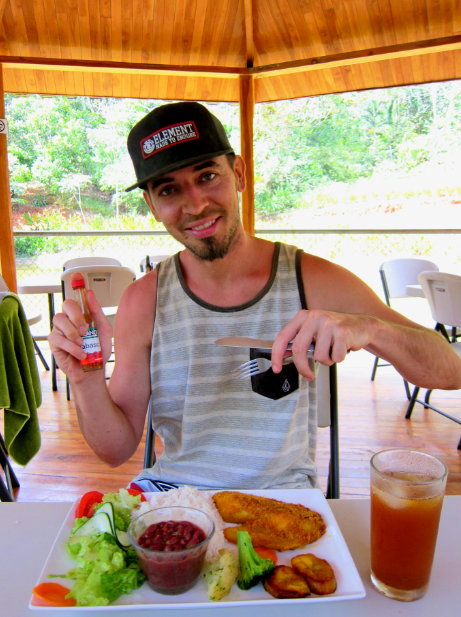 I've been staying in Jaco, Costa Rica, for some time, enjoying the beach, pleasant weather and laid-back atmosphere. However, I had yet to take any tours from Jaco to explore some of the surrounding areas. I decided to book an ATV tour with Adventure Tours Costa Rica in order to explore some of the beautiful landscape surrounding Jaco. I looked at a number of other ATV tour providers, but this particular ATV tour seemed the best fit for me.

My tour was scheduled to leave from the Adventure Tours Costa Rica office in Jaco at 10:00am, so I arrived a bit early and met Diego and Lagarto (a nickname meaning "alligator," I was told), the guides who would be leading our ATV tour. The other tour participants included Jordan, a Canadian, and two couples, Frank and Erin and Mike and Heather, who were all long-time friends from Wisconsin.

Diego and Lagarto handed out helmets, vests and other necessary equipment while Mike got his GoPro attached to his helmet. Diego gave a tutorial and safety lesson to the ATV riders (I rode in the Rhino vehicle with Diego and Jordan), and after a quick practice session in front of the Adventure Tours Costa Rica office, we were off on the ATV tour.

It didn't take long for us to make our way through town from the tour office and soon we had crossed the Costanera coastal highway that demarcates the main part of Jaco Beach from the mountains behind it. We crossed onto a dirt road and followed the path of a river surrounded by agricultural fields contoured to the water and rode on into the mountains as our ATV tour began.

After a few minutes, the vegetation became thicker and the incline of the road became markedly steeper. We rode through a stream emanating from the bottom of a small waterfall on the side of the road. The grade of the road became even more pronounced after that, and Diego shifted the Rhino into low gear and ATV tour cruised easily up the hill.

The road was adjacent to a steep ravine cut by the stream, which I can only imagine flows much more fiercely during the rainy season. All of the sudden I noticed a loud and steady sound that was pronounced enough to be heard over the din of the ATVs. According to Diego, these are locally known as chicharras ("cicadas" in English). The cicadas I'm familiar with in North America are the temperate variety, which only hatch from the nymph stage every 13 or 17 years, depending on the species. This makes them a relatively rare sight in my experience. But Diego said that local species of cicadas are in the jungle year round, every year. Indeed, some quick internet research revealed that the tropical species have shorter life cycles, ranging from two to five years instead of the more protracted life cycle of the temperate cicadas I am more familiar with.

After a series of switchbacks, we arrived at a lookout point ("mirador" in Spanish) that was about 700 meters (approximately 2300 feet) above sea level. It seemed like we'd made a quick ascent from where we had just left the Adventure Tours Costa Rica office after beginning our ATV tour near the beach in Jaco not so long before. From here we had breathtaking 360-degree views. To the West was Jaco, Costa Rica and the Pacific Ocean. To the north and south lay the verdant, jungle-carpeted hills, an undulating terrain that abruptly descended into the deep blue of the Pacific Ocean. To the east, the mountains disappeared into a shroud of clouds heading deeper into the interior of the country. The ATV tour simply served as transportation to these beautiful places, much more than what I had imagined for an ATV tour.

I grew up on Colorado's Front Range, in the shadow of the majestic Rocky Mountains, and spent much time hiking and camping all across the range. I'm very familiar with the dramatic backdrop that mountains can bring to a landscape. Even so, the mountains on this ATV tour in Costa Rica were a totally new experience. Instead of foothills and lower elevations covered in thick pine forests, with bare rock and snow-capped peaks rising above the tree line, the mountains in Costa Rica are covered with thick jungle. From a far, they look to be populated by an impenetrable layer of broccoli.

After taking in the view from atop the mirador, Diego and Lagarto polled the group to see whether we wanted to have our ATV tour eat lunch first or go swimming at the waterfalls. We came to an easy consensus to go swimming first and enjoy lunch afterwards. We began to descend from the mirador to the waterfalls, knifing down switchbacks and steep grades as the thick jungle closed around our ATV tour, blotting out the most intense rays of the sun and bringing a welcome respite from the heat.

We arrived at the waterfalls hot and dusty, ready for a refreshing swim. It was a short walk from the road where we left our ATVs down to the cool glen where the waterfalls formed a sort of natural staircase down a steep descent and then flattened out into slower moving water below. The water wasn't as shockingly cold as the mountain rivers in Colorado that are fed by melting snow. It was plenty cold, a bit colder than I would have expected from a river in Costa Rica. But as soon as I submerged my head it was a pleasantly refreshing temperature that made us all want to linger. We swam for a while in the first pool formed by the lower waterfall, taking pictures and relaxing. Then we climbed up the rocks to the next pool that was formed by the higher waterfall. This pool was smaller in diameter, but deeper and had a number of places on the rock walls that formed the pool's sides to jump into the water from above. The waterfall was definitely a highlight of the ATV tour.

After we had all cooled off and taken tons of pictures, including Jordan and Diego doing some kind of yoga pose between the rocks in front of the waterfall, for which I served as the photographer, we headed back up to continue our ATV tour on to lunch. Lunch had been arranged for us at a tilapia farm and hydroponic vegetable garden located a few kilometers away.

The ride from the waterfall to the tilapia farm on the ATV tour wound through beautiful pastoral surroundings populated by small farms and ranches, with all manner of flora and fauna being cultivated. It was beautiful and untouched, with the farms and ranches following the natural flow of the land. Cows lazily terraced some of the steeper slopes on the small ranches in easy, meandering zigzags, watching our ATV tour go by. All kinds of bird species flew overhead or watched us from their perches in the trees.

We ate a delicious lunch in a picturesque gazebo that was situated in the midst of the tilapia ponds, another highlight of this ATV tour. The vegetables in our meal had been grown on the property as well, by a family that managed the whole operation and also lived there. It was incredibly peaceful, and I felt like I was totally removed from the hustle and bustle of the world.

I was sad when it came time to head back down from the mountains and our ATV tour took us back into Jaco. We rode back down the mountains through the jungle and stopped to admire a group of nesting macaws in a tree alongside the river that we had originally headed in alongside. The ATV tour was a great experience, and it was such a relaxing and fun time, not to mention a welcome escape from the heat down on the beach, that I'd be happy to take this ATV tour again anytime.

If you’re looking for a great ATV tour in the Jaco area, I would definitely recommend Adventure Tours. There are a lot of other tour companies out there, but I was completely satisfied with this Costa Rica ATV tour.