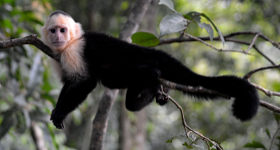 With 25 percent of its land devoted to Costa Rica’s national parks and reserves, the Central American country is a perfect place for wildlife experiences on nature excursions. Encounter unique animals along pristine nature trails, warm ocean waters teeming with undersea life and rivers with wild crocodiles.

While Costa Rica’s range of wildlife is too numerable to list, the super-slow moving sloth is arguably the favorite for visitors to spot. A combination of oddly shaped furry bodies, lazy dispositions, and faces that seem locked in friendly smiles create a cuteness overload. Of the two types you’ll encounter, three-toed sloths are slightly smaller and somewhat more active while their larger cousins, two-toed sloths, epitomize the laid-back Costa Rican lifestyle. You’re almost guaranteed to see sloths on a walk along rainforest trails in Manuel Antonio National Park, often hanging upside down from branches as they shamelessly nap. Manuel Antonio is also a haven for capuchin monkeys, large iguanas, vibrant green tree frogs and the adorable raccoon-like coatis.

Head to a Crocodile Habitat


Costa Rica has one of the largest crocodile populations in the Americas. A 30-minute drive from Jaco Beach takes you to the Tarcoles River -- home to more than 2,000 American crocodiles! A point where the river and swampland meet the Pacific ocean creates perfect brackish conditions for the mighty creatures to thrive. To enjoy an up-close encounter in safety, board a boat and take a crocodile tour through the mangrove-lined waters. Along the way you’ll also be able to spot exotic birds, howler monkeys swinging through the branches of trees on shore while mangrove crabs skitter about the land. Tours culminate with interactive shows staged by death-defying crocodile handlers.

Once abundant in the skies above Costa Rica, wild scarlet macaws have diminished in numbers but you can find the country’s greatest concentration in Carara National Park. Bird watchers from across the globe travel to the sanctuary, which is geographically unique in spanning both dry and humid rainforest ecosystems. While you’ll want to keep an eye out for the prized rainbow-colored macaw, you’re also apt to see brilliant toucans, fiery red and orange-breasted trogons, exotic parrots and a host of waterfowl in the park that lies along the Pacific coast.

Don’t just look on land for an amazing animal encounter. Slipping on snorkel or scuba gear is a great way to see the myriad of creatures that call Costa Rica home. One of the best ways to see underwater life is with a trip to Tortuga Island. During the catamaran sail to the island just off the coast, it’s possible to see bobbing dolphins and jumping manta rays. Surrounded by a rocky volcanic reef, Tortuga has calm, clear turquoise waters that beg for exploration. Swim among massive yellowtail schools, spotted eagle rays, octopus and starfish. Spot seahorses, sea turtles and giant gentle whale sharks on your undersea adventure.

However you wish to commune with the exotic creatures that await at Costa Rica’s beaches, tropical rainforests and national parks, it’s always a good idea to get a guide to help you make the most of your adventure vacation.