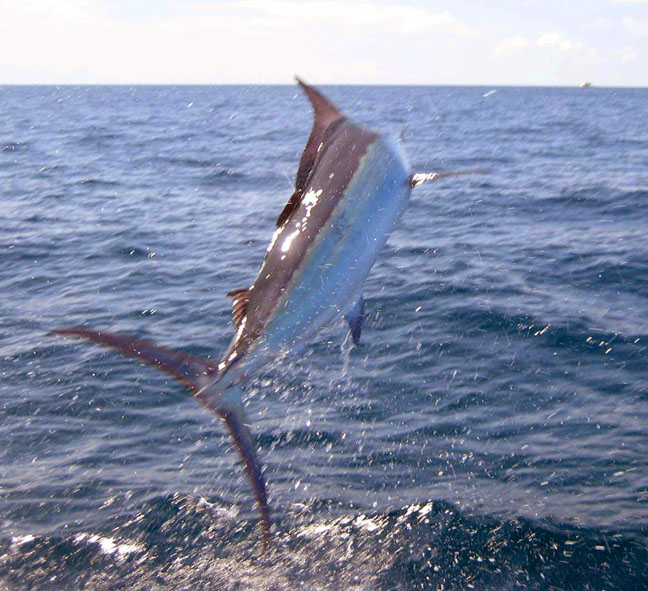 After an atypical Costa Rica hot sailfish bite in the beginning of October, the Los Suenos fishing bite tapered off a bit going in to November.

Most of November, as well as beginning of December was quite slow for Costa Rica fishing with a lot of dirty green water keeping the clear blue waters 30 to 40 miles out for several weeks.

Most boats fishing from Los Suenos were only seeing two to five billfish per day. However there was a steady marlin bite through it all, usually getting a shot or two per day.

During the Los Suenos Fishing Marlin Invitational (November 30- Dec 3rd) there were a few strong numbers posted, but it was far from consistent, and most of the good bites were 40 to 50 miles out. A few of the top boats fishing Los Suenos caught up to three marlin per day, and a few boats reported getting shots at six to eight in a day.

The sailfish numbers were pretty low, most boats only seeing about 2 -6 a day, unless pulling dredges which seemed to double the number of sails you would see in a day.

The WBS World Championship Los Suenos fishing in early December ( 8th-11th ) had even lower numbers. Most of the fish that were being raised at the time were quite shy or finicky. They were only coming up on a teaser and leaving, often not switching off, or fading back to a rigger bait.

The good news is that we are getting in to what is traditionally peak sailfish season here (Jan-April) and in the past few weeks the numbers have been improving. The fish are feeding much more aggressively.

The blue water has moved in much closer and can be found about 20-30 miles from the Los Suenos Marina. Sea conditions have mostly been the flat calm seas Costa Rica is known for, making it an easy run to the grounds.

Fishing boats for the Los Suenos are now seeing five to ten sails per day, and still usually getting a shot per day at a marlin. In the past week we have caught five sails each day we fished offshore as well as a few dorados.

There are a number of dorado around this season typically around 18-40lbs, but we often catch some monster ones here that weigh in over 60 pounds.

Peak tuna season from Los Suenos is May-october, but there have been a few hanging around the spinner dolphins offshore where the birds are diving. The larger yellowfins move in and out during the dry season. They travel the currents with the spinners, so you never know when you may be able to fill your coolers with some fresh sashimi. If you have some good spinning gear with poppers ready you have a good shot at them - this is one of my favorite things to do. If you have never cast poppers on spin gear to yellowfins, then you are really missing out on some of the funnest fishing possible. We consistently catch 60-100lbs tunas fishing with poppers from Los Suenos. For fishing the biggest tuna from Los Suenos ( they can get around 300lbs here), try a bridled up live skipjack or bonito in from of the spinners.

There are almost always some smaller yellowfins around the 26 rock, mixed in with bonito, and lots of other prey. The 26 is very productive year-round, and what is there changes all the time. A mix of inshore species- several types of snappers, AJ’s, Jacks, and pelagic- dorado, sails, and sometimes even black marlin are possible there during dry season (January - May), and lots of smaller wahoo’s join the mix during green season.
It is a great spot to live bait, jig, and/ or popper fish for anglers who like to actually do something other than watch baits trolled behind the boat.

Los Suenos inshore also had a slow spell in November, but has really picked up early this month. The bait is showing up in large numbers, and the rooster fish bite is good. There have been lots of nice-sized cubera snappers moving into the Gulf of Nicoya.

While inshore fishing from Los Suenos you will often catch lots of other species, such as amber jacks, trevallies, cravelle jacks, houndfish, mackerels, and grouper.

The bottom fishing out in 250-400ft range from Los Suenos has been good throughout the past month. There have been lots of conejo’s (tilefish) cabrillia’s(grouper), and a few Congrios (conger eel).

I only did one day of bottom fishing Los Suenos this month, and we caught around 30 tiles, 5 grouper, 11 snapper, and then moved to the 26 and caught 1 AJ, 1 Mullet snapper, and a couple small yellowfins.