A good September for anglers. 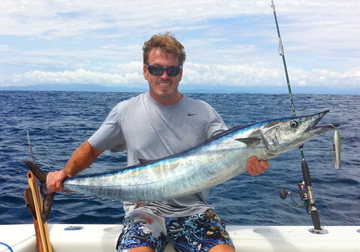 September 2011 has been unusually dry and sunny for peak green season in Costa Rica. Most days have been in the upper 80’s with partly cloudy skies throughout the day. Seas have been quite calm giving anglers plenty of opportunity to head offshore from Los Suenos, and to experience what the Central Pacific coast of Costa Rica has to offer.

Offshore Los Suenos fishing in Costa Rica’s green season months means peak tuna season. While fishing for yellow fins is good year-round, this time of year offers the most consistent chances of finding large pods off spinner dolphins. Schools of hungry yellow fins follow alongside the dolphins, and flocks of birds dive from overhead working the bait balls till they are gone. It is yet another incredible sight to see in Costa Rica fishing.

Several 200lbs + tunas have been landed in the last month. On average we are catching 4 – 10 tunas under 100lbs per day. July – August in Los Suenos is the best time to target the big yellow fin ranging from 30 – 80 lbs. One-hundred pound-class tunas are very common when casting poppers or using live bait. Tuna over 200 pounds, and up to as much as 300 pounds are even possible in Costa Rica, as well as an incredible fight.

Most boats troll the normal billfish spread of teasers and ballyhoos which everything from tunas, to mahi-mahi,-to wahoos will come up to eat.

The Costa Rica peak season in Los Suenos for billfish (sailfish and marlin) is considered to be December through May, but there is a steady pick at them year-round. This September, we have been seeing about 2-8 sailfish per day, and getting about 1 shot at marlin per trip. There have been a couple days in the past two weeks where boats have had up to 20 shots at sails, and have scored double-digit releases.

The wahoo bite around the 26 rock has been good. I personally went spearfshing there a couple days ago and saw eight, and shot two. On the same day, I shot some snapper, and caught a few small yellow fins on poppers.

July- October are the peak inshore fishing months. Bait is readily available, and not far from the bait there are plenty of hungry game fish. Roosterfish, from 20 -80lbs are here and hungry for a blue runner fished around almost any rocky point. Large cubera snappers are a strong fight and great eating. They are occasionally caught using the same tactics, as well as lots of jack creveles, and amberjacks. This year we have been catching 3 - 8 roosters per trip. Smaller, but very tasty lane snappers are all over, and make a great meal fried whole.

Bottom fishing in the 200-400ft range, for various types of grouper and snapper, has been very productive and should continue to be so through october.