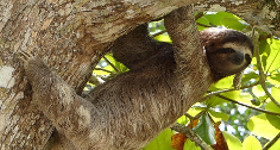 Venture to Manuel Antonio National Park to see multiple monkey species, unique sloth habitats, exotic birds and an amazing undersea world right off of Manuel Antonio’s beaches. One of Costa Rica’s smallest parks has some of its biggest biodiversity. Explore it all on accessible paths that wind through rich rainforest.

A Multitude of Monkeys

Three of the four monkey species that call Costa Rica home live in the park. One you’re almost guaranteed to come across is the white-faced capuchin monkey. Smart, fast and with no fear of humans, a capuchin is apt to snatch your food if you’re not wary. You’ll probably hear howler monkeys before you see them. Aptly named, the species spend much of their time high in the trees and are not nearly as formidable as their booming calls would lead you to believe. Keep your eyes peeled for small orange squirrel monkeys. Once abundant across Costa Rica and Panama, squirrel monkeys are now on the endangered list and only reside in the rainforests of Manuel Antonio and Corcovado National Park.

A Colorful Assortment of Iguanas

As you walk the forest paths, many an iguana can cross your path. Ranging from three to six feet, these impressive creatures are often seen basking in the tropical sun and seem to pay little attention to human visitors. While the species that live in the park are named “green” and “black,” these iguanas actually come in a rainbow variety of colors.

Spend Some Time With Sloths

Arguably the cutest creatures in Costa Rica, sloths abound in Manuel Antonio. Both two-toed and three-toed sloths are often found lazing high in the trees. Locally referred to as “perezosos” (which means lazy), the slow-moving mammals with seemingly plastered-on smiles often appear as bumps on tree trunks until you notice a slight stirring. Bring a pair of binoculars if you want to get a good look!

A Bounty of Tropical Birds

While you’re looking up, many a tropical bird will be visible. Manuel Antonio has over 180 bird species and attracts birdwatchers from across the globe. Scarlett Macaws are some the most-spotted birds. The largest parrot on the planet, these birds have brilliant blue, yellow and red plumage. If the colors don’t catch your eye, you’ll probably hear them as they soar through the air in large and loud groups. Also, keep on the lookout for mangrove hummingbirds, found only in Costa Rica.

Bring some gear and you can get in some splendid snorkeling right from the beach. Dotted by volcanic rock formations, the waters of Manual Antonio teem with tropical fish. You can get up close to starfish, angelfish and the colorful parrotfish that frequent the shore’s unique corals. View crustaceans, mollusks, and even giant manta rays, largely during the months from December to April when visibility is exceptionally high.

Take a tour and head offshore to spot dolphins and migratory whales. A host of dolphin species reside in the crystal waters of the Central Pacific year-round. You can see whales migrating from the Southern Hemisphere from July to October and view whales that come from the north from December to March.

One of the best places to visit in Costa Rica, Manuel Antonio Park offers the unique chance to see rainforest animals and serves as a highlight to any adventure trip.